Although we have reached an impasse with the Moses family, we are able to trace our lineage back a further two generations through the family of Thomas Moses’ wife Sarah. We can now go back to a period in history when the Catholic King James II was on the English throne!

The family of Sarah Evan

In this chapter we shall look at the family of Thomas Moses‘ wife Sarah Evan. Sarah’s father was Evan (ap) Edward, so the Christian name which will feature so regularly in the Moses family comes from this source. Evan was born in 1689, the same year that William III of Orange or “King Billy” invaded Britain to grab the throne from the fleeing James II. We cannot be sure whether Evan was born in Llanwynno Parish as the earliest reference to him is not until October 1717 when he got married at St. Gwynno’s Church. Evan’s wife was Mary Phillip, the daughter of William Phillip and Maud/Matilda Thomas who lived at Gwaelod-y-Waun, a farm in the Parish of Bedwellty Monmouthshire. Evan and Mary went on to have six children – three girls and three boys. As well as Sarah, who was probably born in the early 1730’s, there was Gwenllian (b.circa 1735) and Rachel. Gwenllian married farmer Morgan David of Llanwynno on June 29th 1759; she died over in Bedwas on 7/3/1801. Rachel married joiner Evan Griffith on June 15th 1751; she died in 1805. The three brothers were Morgan, Watkin (known as Watkin Edward) b.circa 1722 and William. Interestingly Watkin became an ordained Baptist preacher (at Cefn Hengoed) and, when he died in April 1794, he left the lease of Gelliwrgan Farm to his daughter Mary Watkin. The farm was owned by the Kemeys-Tynte family and, was remember, the birthplace of Evan Thomas/Moses in 1768. The Baptist faith, along with Gelliwrgan, were it seems common links between the Moses and Evan family’s.

Anyway back to their father Evan (ap) Edward, and he had seven siblings – Morgan (died Gelliwrgan 1738), George, Howell (of Eglwysilian), Florence, Catherine, Jane and finally Margaret (tenant of Cefn who married Meirick Evan in 1718). Evan’s in-laws died in 1730 (William) and 1740 (Maud/Matilda); after which he was left the chattel lease of Gwaelod-y-Waun. Presumably because of the distance from Llanwynno, Evan sold the lease shortly afterwards. On October 9th 1758 Evan was granted a 99 year lease (or the natural life of his grandson Evan Morgan aged 14) on Gelliwrgan Farm by the lands owner Charles Kemeys -Tynte. A year later Evan paid to have the names of two of his son’s (Watkin & William) put on the lease. The previous tenant was an Evan David. On to matters spiritual now and Evan had joined the Presbyterian Chapel at Cwm-y-Glo (the coal valley) at Pen-yr-Heolgerig Merthyr Tudful. Built post 1689, it was a centre of local Non-conformism. After four years there Evan, and two of his brothers, went to Hengoed Baptist Chapel to be Baptised. Evan would later describe himself in his will as a “Dissenting Minister“, but it seems he was never actually ordained. He died in Llanwynno in 1771 aged 82 and was buried at a Baptist meeting house – Ty Cwrdd y Cymer (the house where the confluence meets). This was in Porth where the River’s Rhondda Fach and Fawr meet. The late Evan (ap) Edward was mentioned in a book “The history of the Baptist Association of Wales“, in which he was described as “intelligent, helpful, self-denying, greatly loved and full of kindness and generosity“. Well he may have been all of those, but he seems to have been illiterate as he signed his will with his mark! I wonder how you can be a “Minister of religion” and illiterate; not being able to read Y Biebl must have been a bit of a nuisance.

His will, which he made on the 9th of February 1771 while “being weak in body but sound of memory“, makes for interesting reading. Not surprisingly his “well beloved wife” Mary was the main benefactor. She was left all the “household stuff and house provision“. She was also left three cows and 21 pounds of wool, which was to be delivered every year. As well as the cows, Mary was also bequeathed three sheep – “The best of her liking when she desires them” – you can insert your own joke about Welsh stereotype there! And that’s not all, Evan left his widow six pounds “of good and lawful money“. Other bequests were made to Evan’s children and grandchildren; his son Watkin was left only ￡1 whilst Grandson David Morgan got a new feather bed and ￡5 – lucky boy. But what was our ancestor Sarah Evan left in her father’s will? She and her two sisters were left the “residue and remainder of all my goods, chattels, cattle and credits” which were to be equally divided between them.

Previously Sarah had named two sons she had with Thomas Moses, Edward & Evan after her father.

PS Our ancestor William Phillip’s farmhouse Gwaelod-y-Waun, which means the bottom of the moor, was coincidentally like Ynus-y-bool (home of Evan Moses), eventually turned into an inn. Originally part of the Tredegar Estate, it was demolished in 2010. In his will William described himself as a yeoman.

Thanks to Robert Owen of Berne Switzerland for his help with this section. Robert is a descendant of Gwenllian Evan & Morgan David.

As mentioned earlier, the final resting place of our ancestor Evan (ap) Edward was Ty Cwrdd y Cymer – well not quite! This address is almost certainly the site of the original Capel y Cymer, built in 1743, so making it the 1st purpose built Non- conformist Chapel in the Rhondda Valley’s. When work started on the Porth relief road in 2004, the route of the new road would cut straight through Y Capel’s graveyard. So the remains of nearly all the people buried there (including presumably our Evan) were re-interred at the nearby Trealaw Cemetery. So Evan (ap) Edward ended up getting buried in said cemetery nearly a century after two of his Gt. Gt. Grandchildren (Charles Moses & Jennet Thomas) were laid to rest there! Back when Evan and his fellow Non-conformists used to meet at Capel y Cymer, the building would have been a simple single storey structure with a thatched roof and whitewashed walls. Inside there would have been wooden benches placed on a beaten earth floor. Situated on the southern edges of Mynydd y Cymer, it would have been reached by a rough track to the north which crossed Pont-y-Cymer (Cymer Bridge) and wound it’s way over the mountain to the east where our ancestors lived at Gelliwrgan Farm. Presumably Evan would have made this journey on the Sabbath on horseback as it would have been a long hazardous walk in his “Sunday best”.

Today Capel y Cymer, which was rebuilt in 1834 to replace the original structure, is a sorry sight. Despite being a listed building with a blue heritage plaque on it’s wall, it is in an advanced state of dilapidation. A Capel which at it’s peak in 1851 had a congregation of 950, has now been abandoned and left to rot. 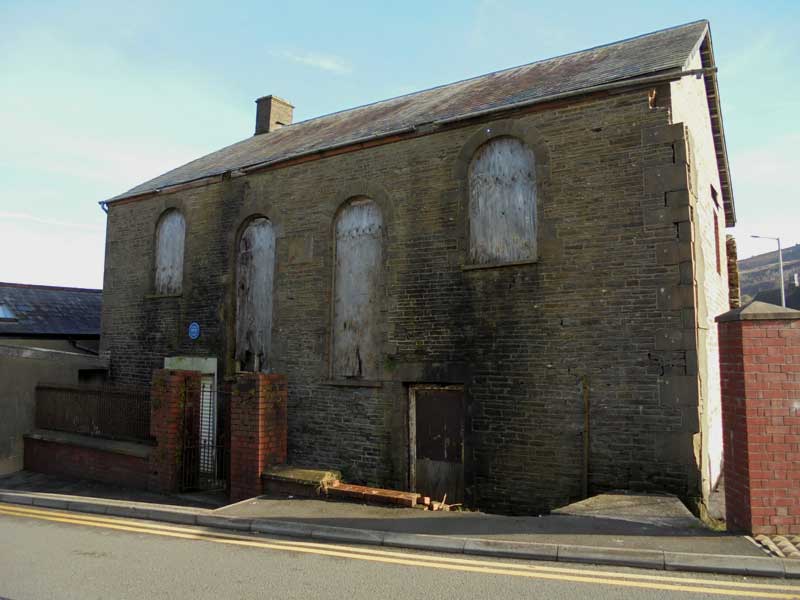 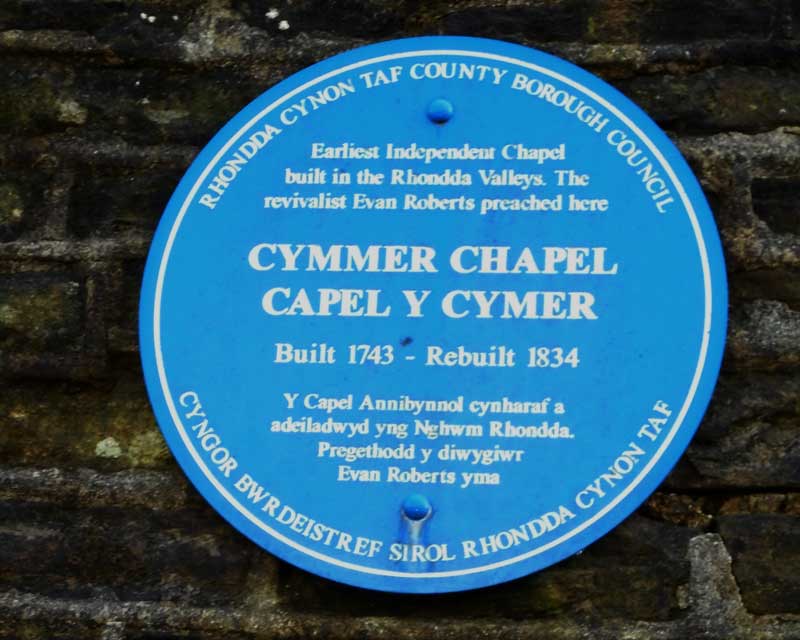