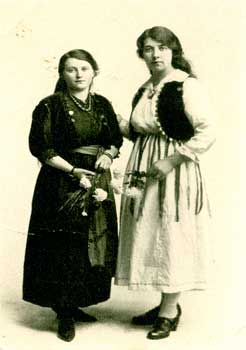 Emily Maud Moses (nee Evans) on the right; perhaps the other lady is her sister Annie.

The paternal side of my Grandmother (Emily Maud Moses nee Evans)’s family, takes us to West Wales. Her Grandfather was John D. Evans born Caerfyrddin Tref/ Carmarthen Town in 1820/21. His wife was Ann (nee Davis) and she was born in Abergwaun/ Fishguard Pembrokeshire in 1822/23. I would guess the couple met after they had both moved east to the then boom town of Merthyr Tudful in Glamorgan. The town’s reserves of iron ore, coal and limestone meant it was able to overtake Swansea and become, by 1851, the largest town in Wales.
There was a John Evans baptised at St. Peters Church (in the centre of Carmarthen) on May 30th 1821. He was born on April 28th to David Evans,a blacksmith, and his wife Margaret of Lammas Street; in all probability this was him. The couple also had a daughter Catherine born in 1816.
Back to Merthyr, and John D.Evans found work there, first as an iron miner and then as a coal miner. The 1851 census finds him and his wife, now with two small children, living in Twynyrodyn at the southern edge of the town, along with two lodgers who were also iron miners. Their next two census addresses were 47 Tramroadside (1861) and “Cilfach (Gilfach) Cynon” in 1871; both of these addresses still exist today. All the Welsh speaking couples children were born in Merthyr Tydfil – Mary J. 1847, David 1850, Ann 1852, James Jan.5th 1854 in Twynyrodyn, John 1856, Sarah 1860 and George M. 1863.

By the 1881 census the Evan’s family had skipped over three valley’s, and were now living in Williamstown Rhondda Fawr. The success of the nearby Penygraig Colliery was probably the reason behind the move. In that 1881 census, middle child James was described as a “single” 27 year old coalminer still living at home with his parents. But the census also tells us that he was already a father – his four year old son Ivor Roderick (b. Williamstown 24/3/1877) was also living there. Given the boy’s middle name, we can be fairly certain that his mother was Mary Roderick, who was not living at the same address but would later marry James on Dec. 17th 1882 in the Parish Church of Llantrisant. This unusual arrangement would also explain the long gap (6 years) between Ivor Roderick’s birth and the arrival of his brother John in 1884. In the next census of 1891, James and Mary Evans were living just over a mile away at Station Road “Ton-yr-efail“, which was slightly nearer to Mary’s parents. The next two children were born here – Annie 1888/9 and Thomas James 1891/2. James’ father John D. Evans had already died before this census, and his widowed mother was still living at 14 Upper Williamstown. The family moved sometime during the next three years, as their fifth and final child (and my grandmother) Emily Maud, was born on the 15th November 1894 at Robert Street Ynysybwl in the neighbouring Parish of Llanwynno. 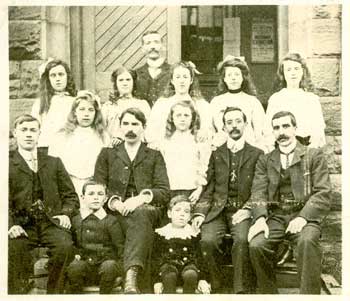 Curiously despite moving five miles away, James continued to work at the same colliery. We know this as he tragically died aged just 43 from “Injuries accidentally received from a mass of coal falling on him at the Penygraig House Coal Colliery“. He survived for 11 days after the accident, and eventually succumbed to his injuries on May 25th 1898 at his mothers home in Williamstown. An inquest into the death was held two days later on May 27th by the Coroner for Glamorganshire, E. Bernard Reece. Further research reveals that whilst working underground on May 14th, James decided to cut corners (not literally) and paid with his life when the roof fell in on him (quite literally) – “Fall of side coal which was being holed without using sprags in the No.2 Rhondda seam. Deceased was taking out the last bit of holing after it was cut on side“. A sprag was a short wooden prop in a slanting position, used to hold up a section of upper or overhead coal while mining lower section. Presumably he had been taken to his mothers house, so not to distress his children, three of whom would have been under ten; but the thing that puzzles me is why was he not in a hospital when he died? Incidentally the death certificate belatedly reveals a middle name James John Evans, which was probably a hangover from the patronymic naming system i.e. James (ap/son of) John Evans.

As touched on before, another mystery was why the illiterate collier was working over five miles away from the family home in Ynysybwl in an age when most people lived within walking distance of their place of work.  Following the tragedy, James’ two older boys (Ivor R. and John) now took over the role of breadwinner and got coalmining jobs in “The Bwl” to support their widowed mam and younger siblings. Indeed “chwarae teg” to eldest boy Ivor Roderick, he seems to have delayed getting married and starting his own family until he was nearly 40. The bereaved Evans family’s first address in Ynysybwl was 82 Robert Street, but ten years later they had moved to “Maeryderwen Ynysybwl“; I assume that should be Maes-y-derwen, which is situated above Butchers Field on Clydach Road.  Apparently Mary Evans had the house built – I wonder how the widow of a coalminer managed that?  Perhaps her entrepreneurial son John paid for it. According to this 1911 census, only John had left home; Thomas James was a 19 year old coal hewer, Annie was a single 22 year old elementary teacher, 16 year old Emily Maud’s birthplace was now given as Ynysybwl, Ivor R. was still single at 34 and Mary Evans was a 54 year old widow. All the family were now bi-lingual which reflected the growing Anglicisation of the South Wales Valleys. After becoming a widow, Mary made quilts to bring in some money; she had a large framework in her house for this purpose.

Emily Maud Evans was known as the “opera singer” within her family, and she married my Grandfather Gwilym Thomas Moses on December 18th 1916 at the Tabernacle Chapel Pontypridd. Maud’s address on the certificate is given as 26 Clive Terrace Ynysybwl; she would sadly die in the same street 18 years later. Gwilym T. or Tom would later be employed by Maud’s older brother John Evans M.E. who owned the Darren-du level, which had opened in 1842 off New Road Ynysybwl. He operated it from the 1920’s until he closed it in 1940, after all his stock was captured by the Germans aboard a “Coaler” at Dunkirk! This apparently was the “final straw” after the poverty of the 1930’s; he did however remain in the mining industry before retiring in his 70’s. The Evans family had also previously owned a shop on New Road Ynysybwl.

John’s brother Ivor Roderick eventually married Sarah Jane Davies; the Davies family also lived on Robert Street Ynysybwl.  Sadly Ivor Roderick was badly injured whilst working underground (at the Darren-du Level; he was carried home on a door instead of a stretcher!) and he subsequently died from his injuries 18 months later in 1936.  This left poor Sarah Jane to face half a century of widowhood!  The couple’s nine children were Thomas, William Ivor /Bill (1921-17/1/2003, aged 82), John (1923-1927, child death), Alfred (b.1925 and moved to Nantgarw when he married), Gomer (1927-1978).  Their sisters were Doreen, Lilian (married Llewellyn Richards 1947), Olive (died Mai 2021; married name Clark), and finally Mair (who was either stillborn or a very early death).  Youngest boy Gomer never married; he was a school teacher who tragically died from cancer aged only 51 and just a couple of years before he intended to retire.  Like his sister (Emily Maud) Ivor Roderick Evans is buried in Ynysybwl Cemetery.  Their brother Thomas, or “Tommy John”, is sadly buried in The Bonjean Military Cemetery, Armentieres in France as he was killed near Ypres during WWI.  Apparently on 12/2/1916 his trench suffered a direct hit from a German mortar.

The tragic loss of Tommy John was probably a major contributory factor in the death of his mother Mary. She died on July 13th 1916 at Maes y Dderwen, almost five months to the day after her youngest son’s passing. Mary was two months short of her 61st birthday, and the cause of death was given as “Influenza + diarrhoea. Exhaustion” – or was it a broken heart? The informant on the certificate was her middle son John of Penrhos Cottage, Ynysybwl, who gave his mother’s age as 56! Shortly after her brother’s death, and shortly before her mother’s passing, oldest daughter Annie somehow found time to marry Albert E. Kerton. Then, five months after Mary’s death, youngest daughter, Emily Maud, would also get married – 1916 was certainly a momentous year for the Evans family. Mary was taken back “home” to Tonyrefail for a funeral service at the Ainon Baptist Chapel which was partially taken by her cousin, the Rev. David Evans of Penygraig. She was then buried at Tonyrefail Cemetery.

An interesting aside, is that according to her will, Mary took out a life assurance policy on her mother (Charlotte Roderick), who as it turned out, outlived her by eight years! Her daughter Emily Maud Moses inherited the policy.