The story of the Moses family of Llanwynno Parish starts, as far as we are concerned, in the mid 18th Century on a mountain top straddling the Clydach and Cynon Valleys in present day Rhondda-Cynon-Taf South Wales. Our earliest known (Moses) ancestor was Thomas Moses, an illiterate farmer, probably born in the 1730’s; his wife was Sarah Evan. This realistically is as far back as we shall be able to go with the Moses line, as this was a time pre-census or indeed pre-certificate of any kind. The only records available are Parish records (which although invaluable are somewhat patchy), and crucially for us, last wills and testaments. Thomas and Sarah were married at St. Gwynno’s Church Llanwynno on June the 4th 1757. They were, like most Welsh people at the time, using the patronymic naming system. This means that the bride was the daughter of somebody called Evan, and the groom was (possibly) the son of a gentleman with the name Moses – i.e. Thomas (ap/son of) Moses. The prefix ap or ab was rarely used in Glamorganshire. Interestingly because of the patronymic system, Sarah chose to remain Sarah Evan after her wedding rather than becoming Mrs. Moses. It seems highly likely that Thomas Moses was not from Llanwynno originally, but may have moved there to marry Sarah. So where was he from? – a neighbouring Parish perhaps, or was he an Englishman from Bristol? (read on).

Right then; last wills and testaments, and luckily for us Thomas Moses registered his in the Llandaff Diocese “In the year of our Lord” 1797. The document made on the 17th April, informs us that Thomas farmed at Wern goch, which overlooked the Cynon Valley. The farmhouse today is sadly little more than a pile of overgrown stones, high above the present day village of Penrhiwceiber. Wern goch translates as “Red Alders”; although ironically the top approach to the “farm” is today dominated by a line of red beech trees. The farm became a victim of its location – sandwiched between the soon to be built Perthgelyn Reservoir, and the spoil from the soon to be opened Penrhiwceiber Colliery. Presumably most of the farms land was bought by the Penrikyber Navigation Collieries Company, which sank the new pit in 1872, and started producing coal seven years later. Although interestingly the farm did not feature on the 1841 census, which suggests Wern goch was vacated well in advance. The farmhouse itself could not be covered by the coal waste, because it was and still is, situated on a public right of way; but it inevitably fell into ruin. Penrhiwceiber Colliery closed in 1985 and nature has reclaimed the “black mountain” to such an extent that one could easily walk past and not realise that there had ever been a farmhouse, or indeed, a large coal mine in the area. 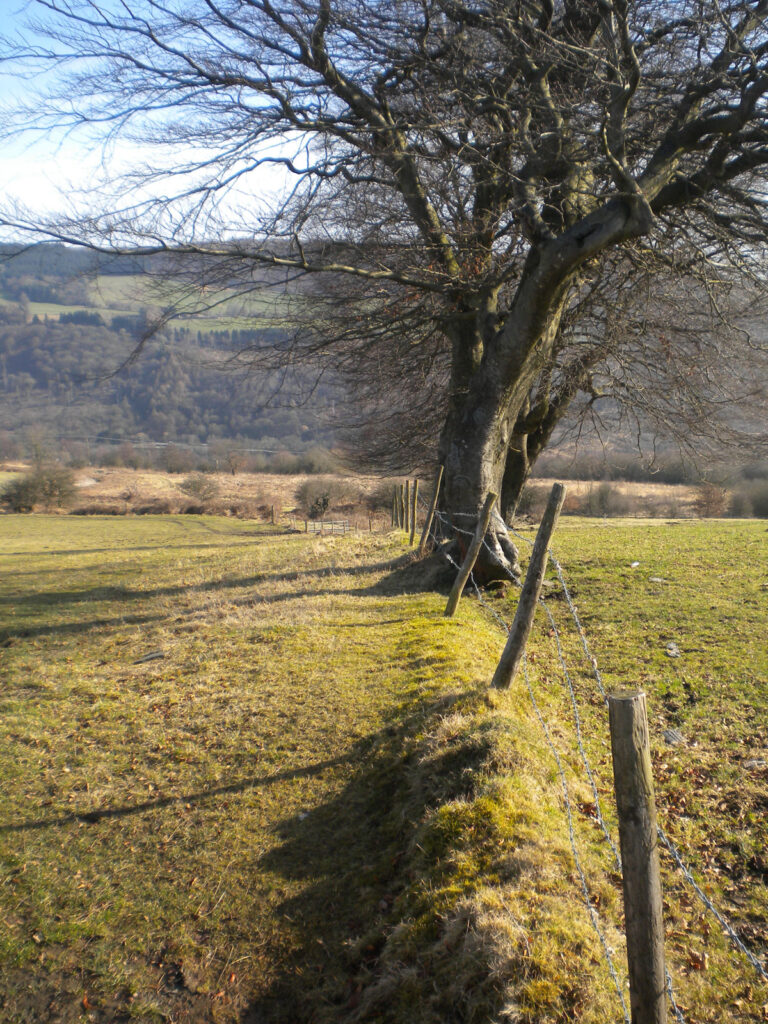 The approach to Wern goch

Back to the will, and because of the patronymic system, all the people left bequests are “Thomas'”. Only one of Farmer Thomas’ children is mentioned, and sadly he is dead; Edward (ap) Thomas died at Wern goch just two months before the document was made. All the other people named were still alive – Edwards widow, and four granddaughters of Thomas and Sarah. The sole executor of the will was Mary Thomas, Thomas’ daughter-in-law; she was left the “Remainder of the Household furniture“! But it seems the primary purpose of the will was to provide financially for his four granddaughters, or until they each found a husband. Edward and Mary’s three daughters were left annually “3 Pound fifteen shilling to be Equally Divided between Each of Them“. The fourth granddaughter was also unsurprisingly left “one pound: five shilling” – this granddaughter, Rachel Thomas of “Bowling greens“, is the link to a son of Thomas and Sarah who was not mentioned in the will, and from whom we are all descended from. Rachel was at the time the only living child of Ifan/Evan (ap)Thomas who was born on the 22nd of September 1768 at Gelliwrgan, a mere ten minutes walk away from Wern goch. At the time of Evan’s birth, the lease of Gelliwrgan was held by his mother’s brother – Watkin Evan/Edward. Evan or Ifan, who we shall from now on refer to as Evan I, will crucially for us sometime between 1802-13, reverse the patronymic system and revert to being a Moses for reasons to be explained in the next chapter. Unlike Wern goch, Evan I’s birthplace of Gelliwrgan is still standing and is now a double barn conversion. I actually sketched it a couple of times back in 1982 totally unaware of it’s part in our family’s history.

Evan and his daughter Rachel, at the time of the will, were remember, living at “Bowling greens“. They next turn up in the roll call at the front of the Moses family Bible living at “Ynus-y-bool” – but it is the same address; I shall explain. Thomas Moses’ will was, like all legal documents, written in English; whilst the Bible entries were written in Welsh. Although not a direct translation, they mean more or less the same thing – “Ynus” or Ynys means a river meadow or an area of greenery, whilst a variation of “bool” or Bwl is powlen, which means bowl or basin. Back again to the time of the will and Farmer Thomas Moses was right to be concerned about the welfare of his granddaughters, as this was a time of quite extraordinary mortality rates within the “Moses” family. The period between 1789-1800 saw no less than nine deaths! – both Thomas and Sarah, their son Edward and his wife Mary (they had been married less than ten years) and two of their daughters (one just seven days before the will was made), plus three of Evan’s children. In light of this appalling run of tragedies, surviving son Evan could have been forgiven if he had become a “Doubting Thomas“; instead he became a “Dissenting Moses“! (see next chapter). One wonders what they all died from; this level of mortality is normally associated with an epidemic in some inner city slum rather than a rural lifestyle.

Back once more to the will and curiously the bequests were only to be made during “The Natural Life of David Evans Merchant at Bristol” -interestingly my Uncle Gwynfor apparently thought the Moses family came originally from Bristol; sadly he is no longer around to expand on that. There certainly was a Moses family living in Bristol around this time with a lot of similar Christian names – more research is needed! Confusingly, according to the land tax assessments of the time, Thomas Moses was listed as being the tenant of neighbouring Gelliwrgan Farm at the time of his death (and between 1782-83); strangely there is no mention of this in Thomas’ will. Incidentally the land tax Thomas had to pay was ￡2 11s in 1782 and only 1s 6d the next year. Finally, our forefather Thomas Moses was laid to rest in an unmarked grave at St. Gwynno’s Churchyard Llanwynno on the 16th February 1798. A Sarah Evan had also been buried there on the 21st of May 1789 – post Evan’s birth and pre-will (in which she was not mentioned); so this must be her. If this is correct then that would mean that poor Sarah was probably only in her fifties when she passed away. Following Thomas’ death the tenancy of Wern goch was taken over by William Edward, who was a nephew of Sarah Evan. The next two tenants were also from Sarah’s side of the family – Mary Edward (1809) and Jenkin Jones (1815). In the next but one chapter we shall drop down into the Clydach Valley next door and follow the life of our direct descendant Evan I Thomas/Moses.

The ancient patronymic naming system used in Wales, whereby the “surname” changed from generation to generation e.g – Moses ap Thomas/ Thomas ap Moses/Evan ap Thomas; came to an end when the English introduced formal ten year census’ to the UK in the mid nineteenth Century. Welshmen from then on had to adopt fixed surnames like their English counterparts.