As mentioned previously, Thomas & Charlotte Roderick’s youngest son Eli emigrated to South Africa (circa 1903-04). He headed to Pilgrims Rest, Mpumalanga Province in the N.E. of the country to work as a gold miner. This was in the second of the Transvaal’s gold fields, and it seems likely that Eli had sensibly waited for the Boer Wars to end (1902) before he finally left South Wales. Eli had married Mary Morse (b.1871) and two of her brothers had previously gone to join the South African gold rush; this appears to have been the reason behind Eli’s bold decision. Eli made the long journey on his own with his wife and their offspring joining him later. We know that previously Eli had travelled to South Africa for a recce in 1895.  He sailed to Cape Town on Boxing Day aboard The Maori.  On arrival in The Transvaal, he would have noted it was a troubled time there, with a planned uprising against British rule defeated later that year; this probably made him delay his eventual emigration.  He was back in South Wales by June the 8th 1896, as he registered the birth of his daughter Elizabeth, who had been born two months earlier on the 19th of April. Mary and the five children sailed to Natal in January 1905 – sadly a sixth child, Edna Irene, died just before the family emigrated. She died in Tonyrefail in May 1904 aged just four; her Uncle Nefydd registered the death in his brother’s absence. Sadly Nefydd himself would pass away just two months later. Edna Irene’s Welsh born siblings were – Margaret (1889), Thomas James (1891), Lilian (1893), Elizabeth (1896) and Llewelyn (1902).

They were later joined by four South African born children – Nefydd (1905-d.1992), Irene May (1907), Kenneth (1909) and Iris (1911). When he and his wife and children arrived after the end of the 2nd Boer War, Pilgrims Rest would have had a steadier population, with wife’s and family’s living there, a more secure source of income and more sobriety!  Perhaps the mine owners paid for experienced miners from places like Wales and Cornwall to emigrate ( they certainly provided housing), otherwise Eli would have to have had saved extremely hard. The family remained in Pilgrims Rest until 1911; nowadays it is a small museum town and a protected heritage site. Eli Roderick died in Johannesburg in 1926 from pulmonary tuberculosis and silicosis; it seems swapping coal for gold made little difference health wise. In 1926 Eli was living in Johanesburg in a cottage owned by the Croesus Mining Co. Sadly his widow Mary had to face 34 years of widowhood, eventually dying in 1960. A nice foot note to end with, apparently in her later years, like her mother-in-law Charlotte back in Tonyrefail, she too was affectionately known as “Gia”.

Thanks to a South African cousin for her help with this branch and for the use of the photograph. 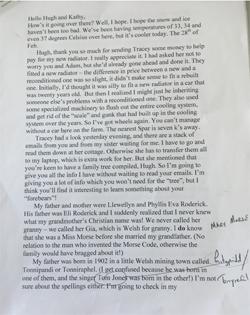 Reminiscences of Peter Roderick, a grandson of Eli Roderick – click to read

If you skip through the opening two chapters, which concern the weather and a new radiator!, the pdf contains some fascinating reminiscences of Peter Roderick, a Grandson of Eli Roderick.