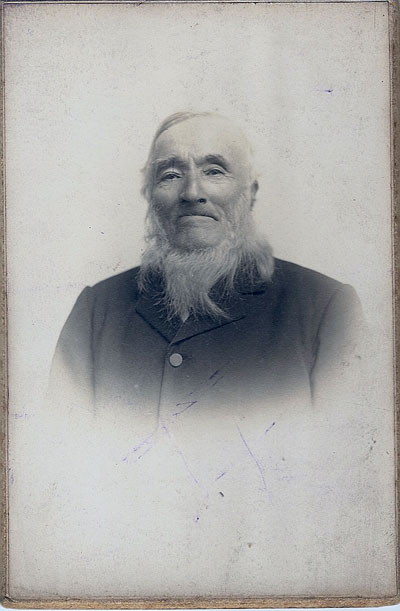 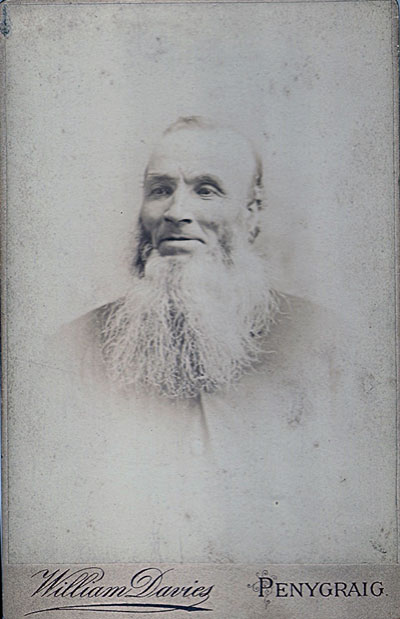 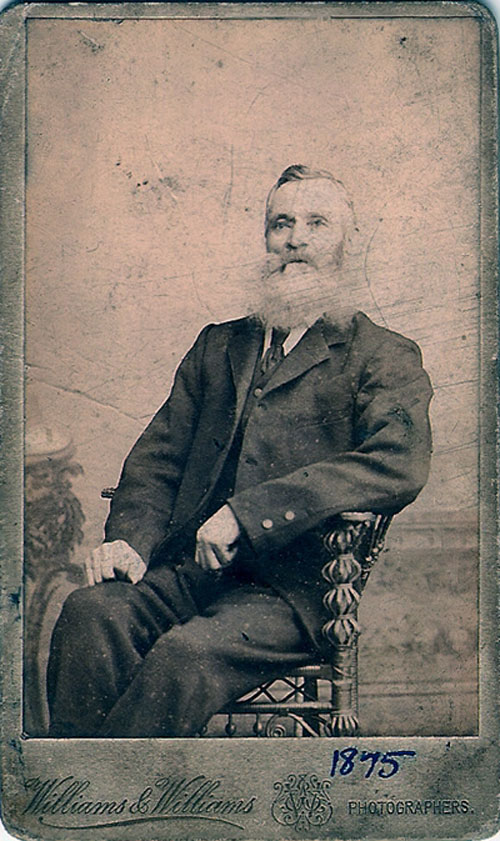 Moses Moses was the second child born to Evan/Ifan III and Catherine/ Catws Moses on the 9th of December 1832 at “Ty Cornel Ger Ynus-y-bool“. He was baptised at St. Gwynno’s Church Llanwynno early the following year on the 20th of January. This branch of our family throws up more than it’s fair share of interesting stories; to say the least! Moses himself had at least seven children and three step-children by three different “wives”, until very recently he held the U.K. male Moses record for longevity (89), bizarrely and erroneously accused himself of bigamy on one of his son’s birth certificate, was possibly an advocate of infanticide, became a father and grandfather in the space of seven months, and finally travelled to the U.S.A. before returning to become an Alderman of Glamorgan County Council. At the time of his first marriage to Aberffrwd (Old Ynysybwl)- based and already pregnant Jane Thomas at St. Gwynno’s Church on February 19th 1853, Moses was described on the certificate as a “Labourer” at Hendre Rhys Farm. Unfortunately, the couple who were both aged 21, did not live happily ever after as Jane, the daughter of another farm labourer William Thomas, died at home of “Fever 14 days” aged just 30 on the 28th of August 1862, five months to the day after giving birth to their daughter Mary (II). At the time of the tragedy, Moses was a Graigwen-based coalminer, and he and Jane already had three other children – asthmatic Evan (V) born 14th May 1853, Catherine (II) born February 9th 1856 and Charles (II) born on December 21st 1857. Curiously the informant on Jane Moses’ death certificate was a Morgan Morgan (also of Graigwen), who was very probably the father of Moses’ future second wife, Sophia Jones, who was also living locally at this time with her husband and children. If you think that was strange, then read on!

Six years after Jane’s death, widower Moses became a dad yet again; this time by a woman nearly five years his senior. Martha Powell, the widow of “Carter” William Powell, already had five children of her own, and she and Moses were close neighbours, living just two doors apart at Godre Wen Houses in Hopkinstown. Things now proceed to get very complicated, as three months before 40 year old Martha gave birth, Moses had unbelievably married someone else!! What a cad; what was he thinking of? It is not known if Martha was invited to the wedding – I would guess probably not! Moses and Martha’s baby, born on August 30th 1868, was named after his father – Moses III, and he tragically dies just ten days later from “Convulsions“. Moses senior now registers the child’s birth and death on the same day – cynics amongst us might think this a suspiciously convenient outcome; hopefully the “unwanted” infant’s early demise was a genuine tragedy, but it does make you wonder. Curiously on the baby’s birth certificate, the mother was described as “Martha Moses formerly Powell“, despite there being no record of any such marriage taking place. As he was now recently married to someone else (read on), Moses seems to have bizarrely accused himself of bigamy! Also, according to both certificates, Moses still claimed to be living in Hopkinstown, despite the fact he was now living some fifteen miles away (again read on). We shall never know the full facts behind this strange episode, but Moses sure found himself in a hole – and he kept on digging! If all this seems rather far fetched, maybe Moses, who was still only in his mid-thirties, just panicked at the thought of the number of children he had to support; which was now up to eight, as Moses had inherited three step-children from his second marriage. In the next census of 1871, Tredegar born Martha was still a widow, still a Powell, but had moved house; albeit just a couple of streets away. Interestingly, to make ends meet, Martha had now taken in four male lodgers!

Moses’ bona fide wife was also a widow; Llantrisant- born and (now) Aberaman- based Sophia Jones nee”Morgans” (b. 1834), the daughter of the late coalminer Morgan Morgan and his wife Jennett. Sophia’s first husband was Gwilym Jones, a coal miner, and the family lived on the Rhondda Road in Hopkinstown, just a short distance from Moses and Jane. The second marriage (for both) took place at the Register Office on the 18th of May 1868 and, on the certificate, Moses gives his place of residence as Twynyrodyn, which is a short walk south of Merthyr Tydfil town centre. So Moses had apparently moved three valleys away from Hopkinstown and Martha Powell, and was now just five miles and a short train journey (through Mynydd Gethin) away from Sophia. There was then a long gap of four years before we heard the patter of tiny feet again; which, back then, was quite unusual. This is almost certainly to do with Moses travelling to America sometime between May 1868 and May 1871. Presumably he visited his younger brother Morgan (who had emigrated in 1866) with a view to his own emigration – or maybe he just wanted to put more than fifteen miles between himself and Martha Powell! In the census of 1871 the “new” Moses family, consisting of Moses’ four children and three of Sophia’s, were living at Llwynypia half way up the Rhondda Fawr/large and about five miles north of Hopkinstown. Not content with seven children between them, in May 1872 Sophia gave birth to a daughter Keziah. Moses’ second family was completed three years later when Sophia gave birth to a son Morgan (II) on the 14th of April 1875 at Blaenclydach, by which time she would have been 41 years of age.

Moses Moses would live out the rest of his long life in the Rhondda; a life which would take an unusual turn in 1892, when he became an Alderman of Glamorgan County Council!  In only the second ever election for this council Moses, described as a “working miner”, gained a surprise victory at Cymer on March 8th.  Moses stood as a Lib-Lab candidate, although possibly more Lab than Lib as he was subsequently described in the press as the Rhondda’s 1st ever Labour County Councillor.  His victory was by only 26 votes, as he defeated Idris Williams (Liberal) by 485 votes to 459.  Idris Williams was a native of the Rhondda, and a prominent if somewhat controversial figure in the public life of the Valley.  Moses Moses however, had the support of the Porth Labour Committee – an adhoc organisation which did not appear again in subsequent elections.  These elections of 1892 were notable for the number of working class men who were elected; this reflected the rise of non-conformist liberalism, which challenged the prevailing influence of the landed gentry.  Moses would have been 59 years old when he became an Alderman, and he held the post until he retired six years later.  I assume  that he had now learned to read and write, although he was still signing certificates with an “X” at the age of 42. Perhaps his new position was not as grand as it sounded, as he was firstly “County Alderman for the Sanitary Committee and the Allotments Committee (Southern district)“. However, after two years, he became “County Alderman for the County Rate Assessment Committee and the Technical Instruction Act Committee (Southern district)“. Then in his last year he was “County Alderman for the County Rate Assessment Committee only” – Southern district of course! For those of you concerned as to whether Moses gave the Cwm Rhondda council tax payers value for money, the records tell us he attended 19 out of a possible 28 County Council meetings. His last four available census entries show four different addresses – 178 Williamstown (1881), 41 New House Upper Williamstown (1891), 58 Amos Hill Penygraig (1901), and 83 Amos Hill (1911). Those last two census entries tell us that Moses’ step-daughter Mary Ann Thomas had moved back in with Moses and his family after being widowed in 1893. Previously in the 1881 census, she had been called Miriam; presumably the census enumerator must have misheard her name!

Not only did Moses outlive second wife Sophia by nine years, he also comfortably outlived his step-son; – coal hewing bachelor Gwilym Jones (born Llantwit 1854) who died in 1904. Incidentally, Gwilym, who was still living with Moses and Sophia, went under the surname Moses in the 1901 census. Moses Moses died of senile decay and exhaustion (!) on the 4th of May 1922 at 41 Pantygraigwen Road near Pontypridd, the home of eldest surviving son Charles (II) who was in attendance. He was buried with Sophia at the impressive Soar Chapel in Penygraig, which coincidentally was opened in the same year he was born. Soar Chapel closed as a place of worship in 1987 and became a community centre; later it’s graveyard was laid out as a garden of remembrance with nearly all the headstones, including that of Moses and Sophia, removed.  “A place set apart and sacred to the memory of those whose mortal remains rest there”.  Before that happened, only Sophia’s inscription on the headstone was still legible; it read “Er serchus cof am Sophia, anwy briod Moses Moses, yr hon a fu farw Tachwedd 5 1913 yn 80 mlwydd oed“. Translation – “In loving memory of Sophia, beloved wife of Moses Moses, died November 5th 1913 aged 80“. In his surprisingly small obituary in the “Rhondda Leader” Moses was described as “one of the best known figures in public life at Penygraig“; quite an achievement for someone who was a “humble” coal miner for the majority of his working life. 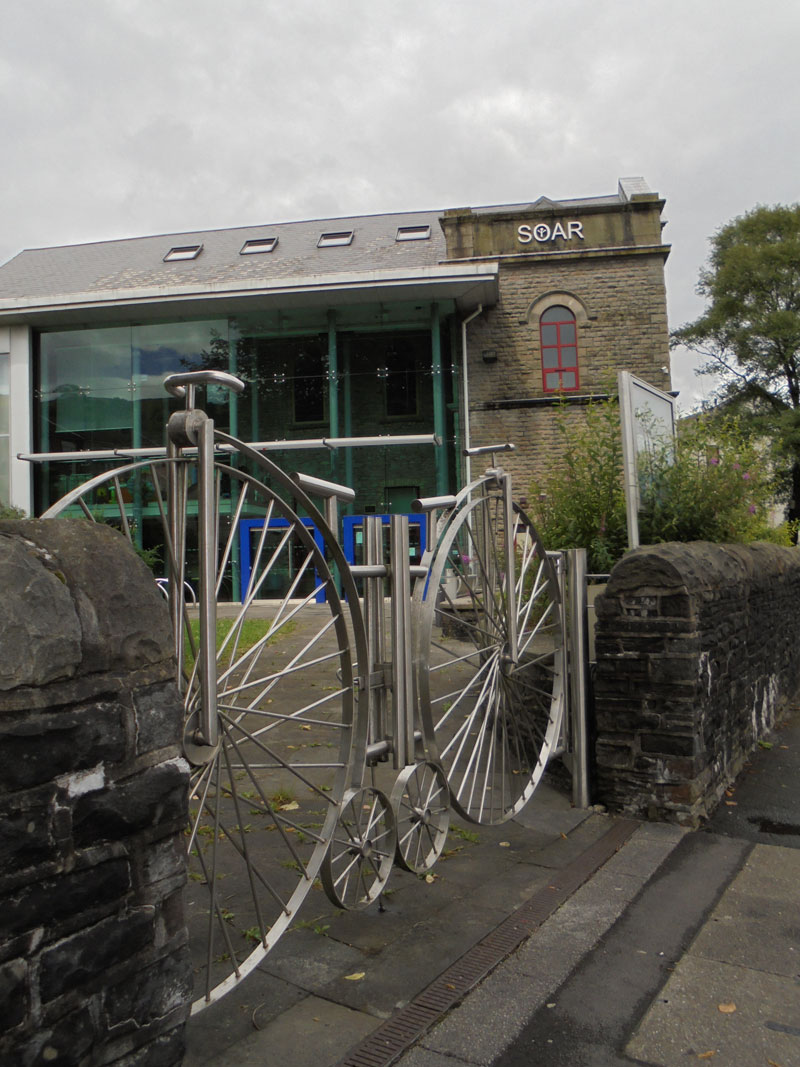