In late 2018 I was tipped off that the National Library of Wales in Aberystwyth had in it’s collection a book entitled “Evan Moses his book aged 21 in the year of our Lord Jesus 1818”.

Yes, it was our Evan Moses (III b.1797), and the book in question was something called a commonplace book, which was part of a larger collection of papers which had been deposited at the library. The collection of papers belonged to John “Rufus” Williams (1833-77), a Baptist Minister and author.  A commonplace book is something into which notable extracts from other works are copied for personal use – it is essentially a scrapbook.  As if the title wasn’t enough of a clue, the books contents are dominated by religious life, plus rural Parish affairs.  The book, which contains a contribution from Evan’s younger sister Ann (in 1829), was written mostly in Welsh, but there are several pages in English, which was clearly his second language.

Dotted throughout, are entries recording deaths in the Parish; many of which are extended family members, which given the sparse population is probably no surprise!  Curiously though, there doesn’t appear to be any deaths from his paternal Grandfather  Thomas Moses’ side of the family, only from his mother’s (Ann nee Evans) and paternal grandmother’s (Sarah Evan) branches.  This suggests that Thomas Moses was not a local, but had moved to Plwyf Llanwynno to marry Sarah.

The cut off point of the book is 1830, a momentous year for Evan – his father (Evan I) dies and he leaves the spacious family home of Ynus-y-bool for the cramped Ty Cornel.  Evan also get’s married and has the first of his nine children – another Ann Moses.  The book also reveals that young Evan appears to be able to read and write music, with three pages containing written music.  One piece, titled “The Judgement Tenor”, seems to be an original composition by our Evan; the current Vicar of Abercynon recently played it for me on the Church keyboard – and it sounded pretty good!

It seems strange now, in this secular age, how much our ancestor’s everyday lives revolved around their Christian faith; it is hard to imagine now any 21 year old male making a list of the kings of Judah as our Evan did back then!  Finally, what a real privilege to be able to look at something written in the hand of my Gt.x3 Grand-father some 200 years ago. 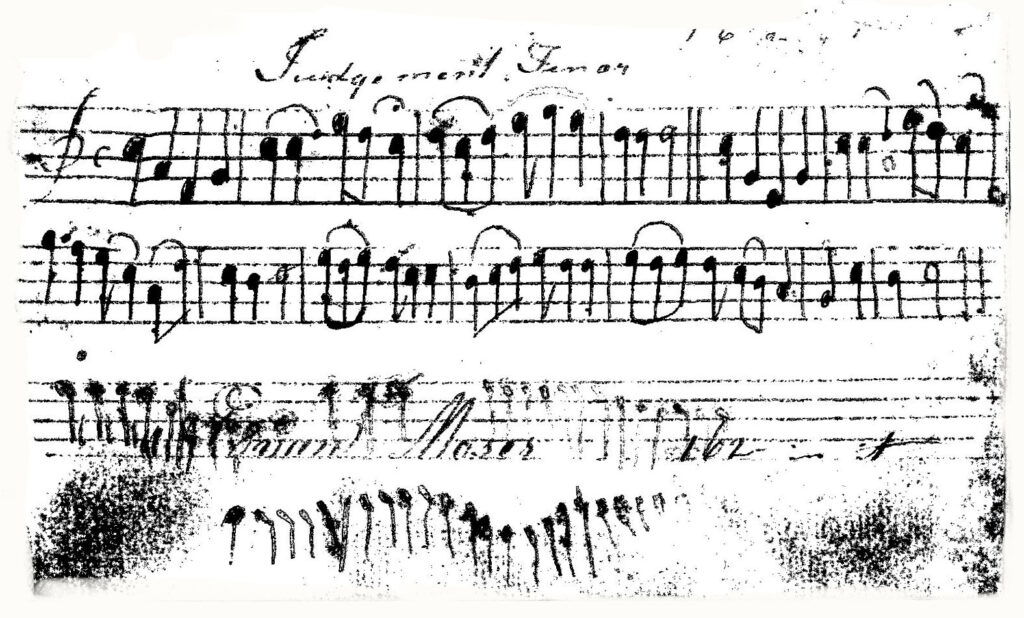