(Jennet is a variation of Janet meaning “God is gracious”)

Jennet was the youngest daughter and eighth child, born to Evan/Ifan III and Catherine/Catws Moses, up at Hendre Rhys Farm in the Parish of Llanwynno, Glamorganshire. Her birth certificate gives her DOB as the 4th of September 1850; whilst confusingly, the Family Bible states she was born on “Awst 30” (August 30th) – at least they agree on the year! She was named after her maternal grandmother Jennet Miles (nee Williams).

Unsurprisingly Jennet went on to marry a coalminer – Evan Thomas b. Penmaen/Bedwelty Mynyddislwyn circa 1849. Thankfully this Evan is not the same E.T. who fathered Jennet’s eldest sister Ann’s first two children. The marriage took place at The Sardis Chapel Pontypridd on January 3rd 1874, with Jennet’s younger brother Twm as a witness. Twenty three year old Jennet was still living up at the farm before she got married, whilst the 25 year old groom, the son of the late colliery overman William Thomas, was living at “America Fach Llanwonno“. America Fach, or Little America, was actually a row of cottages in Porth Cwm Rhondda; and, in one of these dwellings, Welsh Baptists used to meet before a proper Chapel was built for them. Perhaps it was a shared Baptist faith which brought the couple together. Surprisingly Jennet and Evan only had two children – William Moses born in Porth on the 27th of July 1877; and Daniel Evan born July 1880. The boys middle names were a nice little nod to their Grandfather, Farmer Evan Moses, back at Hendre Rhys. The 1881 census finds the Thomas family living at 19 Troed-y-rhiw Place on the outskirts of Porth, along with Evan’s younger sister Martha. By the next census of 1891, they were still at the same address but the only child now living at home was Jennet’s 13 year old Gt. niece Mary “Davis“, the daughter of her niece Kate Davies. Eldest son William Moses’ whereabouts are not known, but Daniel Evan’s non-appearance hides a real tragedy – he had died on the 10th of March 1884, at home, from “Scarbalina Croup“; he was just 3 years and 9 months old. Scarbalous croup was a severe cough which affected boys more than girls, and boys under five years of age were especially vulnerable – poor Daniel E. ticked both boxes. He was buried three days later over at St. Gwynno’s Llanwynno. 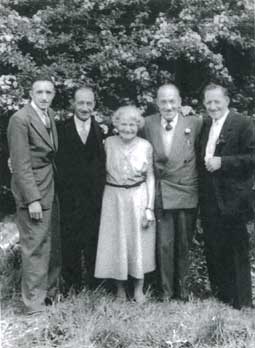 May 1960 and four of the Thomas Boys pose with their mam.
L to R – Glydwr Louvain. Percival, Ellen Mary (Nellie) nee Hicks, Arthur and Bryn

The 1901 census again finds the family at the same address; well sort of – it was now 19 Aber Rhondda rather than 19 Troed-y-rhiw. This was because the local Pit similarly changed it’s name, and presumably it was a colliery house in which they lived. This was not the only change – Jennet was now “Janet” (presumably because of illiteracy), Evan was now a coal merchant rather than miner, whilst William M. was back – and married. William M. was now working as a coal haulier above ground, and his wife was Ellen Mary “Nellie” Hicks (or Hix) born “1882” in “Not Known Dorsetshire“! In the next census, she had remembered it was in fact “Wincanton Dorsetshire” where she was born – Wincanton is actually in Somerset! The family coal business was obviously now doing well, as this 1911 census entry tells us they were able to move to better houses on Cemetery Road Aber Rhondda Porth – William M. and Ellen M. to No. 66 and Janet and Evan to Duffryn House. Five Porth born grandchildren also appear in this census entry – Daniel W.1902/ Arthur 1903/ Percival 1905/ Thomas Brinley “Bryn” 1907/ and Lillian Janet 1910. They were later joined by three post census siblings – Phyliss May, Glyndwr Louvain and Elwyn Sidney. Note that William M. named his first born son after his brawd bach (little brother) who had died as a young boy; a nice touch.

Sadly Cemetery Road was also the end of the road for poor Jennet/Janet. She died on Christmas Eve 1908 from “Bronchitis Cardiac Failure” aged just 58. Surprisingly her husband Evan then registers the death on Christmas Day! Jennet was one of three of the “Farm generation” who passed away in 1908 – her brother Evan IV had died in America the previous summer, whist another brother Charles had died less than a month before in an adjacent road (Cymmer); also from bronchitis. Jennet/Janet was buried in the adjacent Trealaw Cemetery near her brother, and was joined less than two years later by Evan, aged “63”. Interestingly he now reveals a “middle” name – Daniel. This was in fact the surname of his step-father John Daniel, and so would explain the appearance of this Christian name in subsequent generations of this branch.

Sadly in the summer of 1927, William M. was laid to rest with his parents – he had died of stomach cancer at just 50 years of age. It would appear that he had taken over the family business following his father’s death. Only his eldest child, Daniel W., would now remain in Porth, as three of his single son’s (Arthur, Percival and Bryn) found work (and a house) and moved the entire family (via Tonypandy) to Croydon South London. Ellen Mary lived out the rest of her long life here with, and later near her children. She outlived her husband by some 38 years, and sadly died in South Norwood London on her 84th birthday!

Thanks to Hilary Elsey (Jennet’s Gt. Grandaughter) and her husband Richard for their help with this branch. They have also done extensive research into the Thomas family –