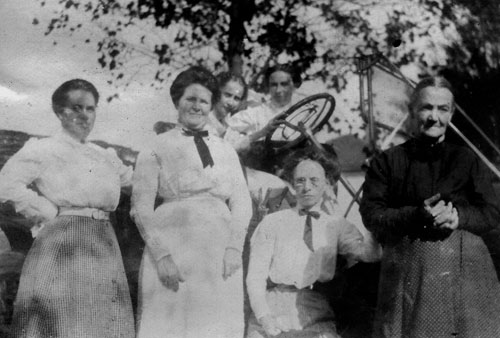 From Ynysybwl to Ohio- this amazing photograph shows two branches and three generations of the “Moses” family re-united in the U.S.A. The four ladies in the front were all Welsh born – L-R Elizabeth Ann “Lizzie” Miller, Aredes Reese & Alice Jenkins (daughters of Ann Johns) and Catherine Lewis. The girl in the background (left) is Katherine Miller and sitting next to her is her Auntie Janet Lewis. This photograph must have been taken sometime between 1905-18.

Named after her mother, Catherine II, was born up at Hendre Rhys Farm in the Parish of Llanwynno, Glamorgan on the 27th of February 1847 (“Chwefror 28th” Family Bible). She was the 7th child born to Farmer Evan Moses and his wife Catherine Moses formerly Miles, and was the second of three consecutive girls born between 1844 and 1850. Curiously her father did not register the birth for over a month (March 31st); Catherine was later Christened on the 15th of May 1848. A certificate placed inside the Family Bible, tells us that as a twelve year old girl, Catherine had joined “The band of Hope” on the “17th day of July 1859“. The Band of Hope was a temperance organisation for working class children and was founded in Leeds England in 1847, coincidentally the year of Catherine’s birth. All members took a pledge of total abstinence and were taught the “evils of drink“; children could be enrolled from the age of six and would meet once a week to listen to lectures and take part in activities. Somewhat ironically, Ynus-y-bool the former family home, was by now The Ynysybwl Inn!

Seven years after her pledge, nineteen year old Catherine got married on the sixth of October 1866 at the Carmel Chapel Graigwen Pontypridd, which at the time would have been the nearest Chapel to Hendre Rhys. Intriguingly Catherine lies on the marriage certificate, and gives her age as 21 – the age at which you did not need your parents consent to marry. It might be just a coincidence, but Welsh speaking Catherine got married at her “local” Chapel shortly before it switched to being an English language Chapel. Her husband was 23 year old coal miner Richard Lewis (b.1843), the son of the late road labourer James Lewis. At the time of the wedding Richard was living at Penrhiwfer Cwm Rhondda, whilst Catherine was living and working at Cefn House, which was within sight of Hendre Rhys Farm. So why was Catherine in such a hurry to get married? Well, the reason was quite predictable – Catherine was pregnant. A daughter Elizabeth was born five months after the wedding on March 2nd 1867; later on after emigrating, Elizabeth would get a middle name – Ann, and a nickname – Lizzie.

The Lewis family had emigrated to Ohio via Pennsylvania and according to future U.S. census entries, Richard Lewis, who unsurprisingly “worked the coal mines“, gave his date of immigration as between January and June of 1870. Elizabeth Ann’s four siblings were all born in the U.S.- yet another Evan (X) b. PA 1875, Janet/Jennet M. b.1877 (by which time the family had settled in Ohio), William J. b. Ohio 1882 and finally a fifth sibling who died as an infant (sadly no name or dates are known). Surprisingly only eldest child Elizabeth would marry and have children; her brother Evan did not make it to the turn of the century, whilst her sister Janet never married.

Their father had wisely given up coal mining (before the end of the century) and in the census of 1900 he was described as a merchant in Clinton Village, Franklin Township, Summit Co. Ohio. Apparently he ran his own retail store in the village. In this same census entry, his wife’s name was spelt “Katharine“, and the age difference between the couple was given as two years, which perpetuates the “fib” on their wedding certificate (it should have been four years). Catherine Lewis died in 1918 whilst her husband Richard lived for another decade, dying on 31st December 1928.

As touched on earlier it would be left to the eldest, and only Welsh born child, Elizabeth Ann, to carry on the Lewis/Moses family line following her marriage to Ed Miller. They lived in Canton Ohio. They had two children – a son Cedric Henry (1890-1967), and a daughter Katherine nine years later. Katherine would go on to marry George M. Dreher, and they had three children before the family was hit by a triple tragedy over Christmas and New Year 1928/29. First Katherine died from influenza on the 28th of December, shortly after giving birth to a daughter Janet, who only lived for five days before she too succumbed to influenza on New Years Day. Remember Richard Lewis died on December 31st (influenza again); so poor Lizzie lost her father, daughter and grandaughter all in the space of a week. Not surprisingly this deeply affected this branch of the family. Katherine and George Dreher’s marriage had previously produced two sons – Richard Lewis b. Canton Ohio 5/3/1924 – 18/8/2017 aged 93 and John 1926-1998. Richard L. or “Dick”  was raised by his Gt. Aunt Janet Lewis. Katherine’s older brother Cedric Henry Miller married Hazel Luther, and they had just the one child, and indeed he was named Luther Cedric (11/2/1922-26/9/2014). Luther “Lou” Miller, a veteran of WWII, married Mary Elizabeth Walker (22/2/1922-20/9/2013) and they had four children – Suzanne E 1948, Robert 1950, Janet 1952 and Nancy 1957. Elizabeth Ann “Lizzie” Miller died on March 28th 1943 aged 76. 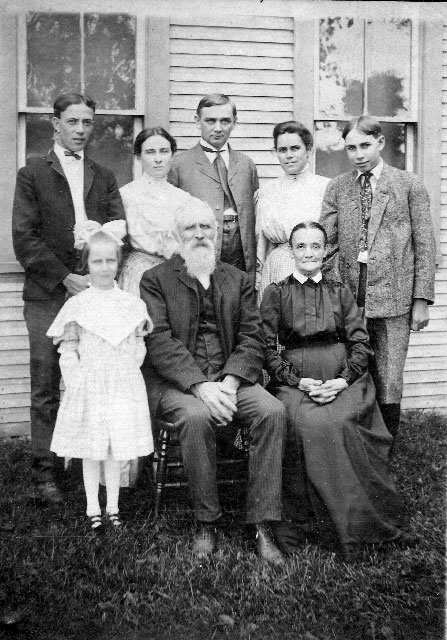 There is an amazing story connected with Catherine and Richard’s second daughter – Janet Lewis; which brings us to the letter from America referred to in the title. Janet was an elementary school teacher for over 50 years and sometime between 1919-1921 she travelled to the U.K. to visit her Welsh cousins. Janet had obviously been brought up with tales of the old country and, in particular, Hendre Rhys Farm. These tales were presumably slightly exaggerated as, when Janet arrived in Ynysybwl, she thought the rows of terraced houses were the farm’s outbuildings and stables! On visiting Crawshay Street, she exclaimed the buildings were “almost good enough for people“! As faux-pas go this was near the top end of the scale and might explain why trans-Atlantic contact ceased! But seriously though, it was obviously the passing of key personnel like Mary and Elizabeth Ann Edwards in the U.K. and Alice and Aredes Johns in the States that caused contact to drop off. This, together with World Wars and economic depressions, sadly but understandably meant that keeping in touch with trans-Atlantic cousins was not a top priority.

Back to Janet, and she came over armed with a camera to take photographs for the American “Moses'”, especially her cousins Alice and Aredes, who had left South Wales as teenagers. The Johns family had presumably been persuaded by the Lewis family to emigrate to Ohio. Alice Johns wanted to see a photograph of a gate she used to swing on as a child; sadly though, Janet photographed the wrong gate; the actual one had been built over by the “new town” – Ynysybwl presumably? This was revealed in a letter that Janet wrote on her return to Canton Ohio, and which she sent to her cousin Elizabeth Ann Phillips (nee Edwards) back in Ynysybwl. Janet’s letter tells us that she had visited both her Lewis and Moses relatives in South Wales and some of them had asked her about any marriage plans; to which she writes quite sadly “No one seems to want me“. Unfortunately for Janet, who was by then in her mid-40’s, that turned out to be correct. The letter ends by wondering whether “Tom” Phillips (Elizabeth Ann’s son) was going to come over for a return visit – well it turned out he went to America on a short tour with an orchestra, with whom he was a violinist. A rendezvous before one concert was arranged with some American cousins, but strangely no one turned up!

Janet’s letter still exists today and is in the possession of Catherine Lewis’ Gt. Niece Ann Ball in Ynysybwl. Would’nt it be fantastic if the photographs she took of Ynysybwl in the 1920’s still exist over in Ohio! Thanks to Robert Miller of Chagrin Falls, Cleveland, Ohio for the American information. . Robert or Bob, had chanced upon our website in May 2013 and is a Gt.gt. Grandson of Catherine Lewis (nee Moses)!; this illustrates perfectly the power of the internet.

So it was the success of the Lewis’ in Ohio, which prompted the emigration in middle age of Catherine’s sister Ann Johns (nee Moses) and her family, Not surprisingly the two branches remained very close until quite recently