An interesting aspect of researching our family’s history has been charting it’s relationship with Yr iaith Gymraeg / the Welsh language – going from bi-lingual to Welsh only, back to bi-lingual and then finally to English only. This mirrors the decline of the Welsh language in the mining valley’s of South East Wales. Once the coal mines opened, the influx of English speakers swamped the local Welsh speakers and virtually killed off Cymraeg as a day to day language. Just to the south of where our ancestors used to live, the large town of Pontypridd went from being a “Welsh” town to an “English” town inbetween two 19th Century census’. Welsh would retain a foothold in Cwm Clydach for a little while longer, no doubt due to The Lady Windsor Colliery in Ynysybwl opening a lot later than the Cwm Rhondda mines. The “Farm Generation” up at Hendre Rhys spoke only Welsh; presumably, as from the mid-19th Century all children had to be taught through the medium of English, they did not go to school. Perhaps their father, Farmer Evan Moses, withdrew them as some sort of protest; ironically he himself was bi-lingual. Our Cwm Clydach ancestors were certainly pro-Welsh, – Chapel rather than Church; indeed the decline in Chapel attendance and the speaking of Welsh are almost certainly linked. 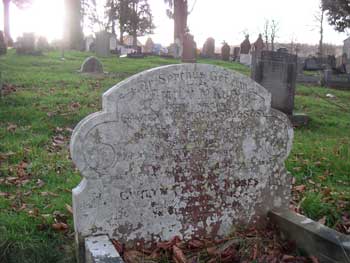 Welsh was the first language of my grandparents and their older children, who were given overtly Welsh Christian names like Glyndwr and Mair. My father told me that when he was a child being raised by his nan “Mamgu” and his widowed dad, it was Cymraeg only in the Moses house on New Road Ynys-ybwl. Interestingly my father could understand what was being said to him, but could not speak it back! My Grandfather Tom Moses’ second wife was from a family who had moved to “The Bwl” from Leeds, so from then on it was English only. Tom’s headstone in Ynysybwl Cemetery (see photo opposite) would be the last in our family to be inscribed in Welsh, and indeed his funeral service at The Noddfa Chapel was conducted in Welsh (with one English hymn). The language and the past live on in Ynysybwl today through street names like Buarth-y-Capel (The Chapel Yard), Glanffrwd Terrace and the rather steep Heol-y-Plwyf (Parish Street) in the centre of the village which my father used to jokingly tell me translated as “Hell of a pull“! 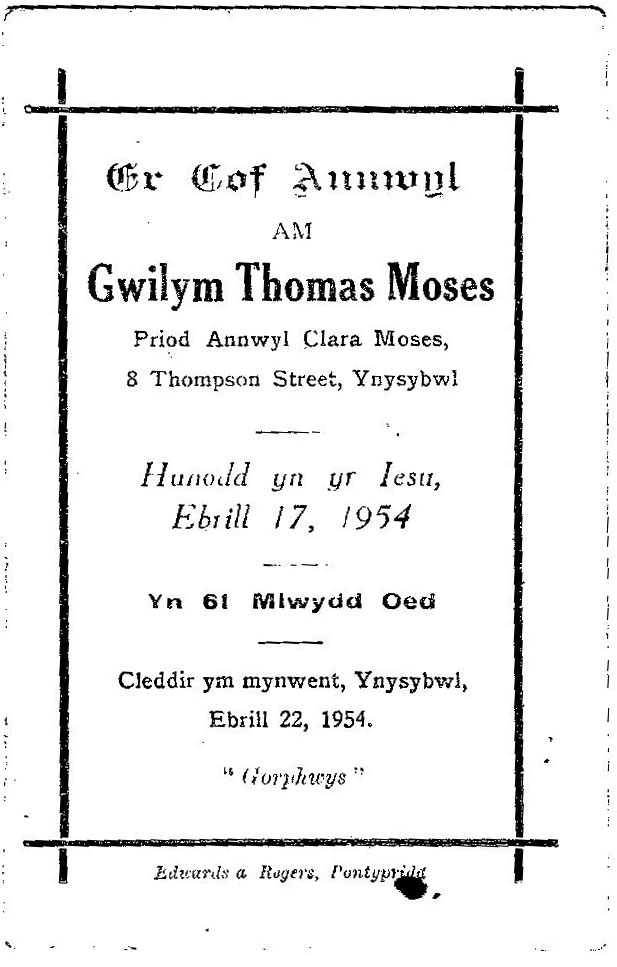 The four branches of the Moses Family who emigrated to the USA would have taken the Welsh language with them; it would be interesting to know how long Welsh continued to be spoken by their descendants.