This chapter finds our ancestor Evan I and his family, living on the bancs of The River Clydach, in the late 18th and early 19th Century. This was a period of great significance in Welsh history, which saw a huge evangelical revival; no pun intended! Our family were still going under the surname Thomas, and were remember, living at Bowling greens /Ynus-y-bool in the old County of Glamorgan. We can be 99% certain that this address is the present day Ynysybwl Inn, situated at the bottom of Mill Road in Old Ynysybwl Rhondda-Cynon-Taf. According to an extract from the book “Glanffrwd – History of Ynysybwl” – “Mr. Edwards once owned Green-meadow farm which prospered nearby … Renowned for its breeding successes of pedigree bulls, the farm later was converted into an inn, and its notability for bull breeding (some say) brought about its new name: Ynysybwl Inn!” A nice story, but either way the present day much larger village next door – (New)Ynysybwl, gets itis name from our ancestors home. Around Evan I’s time, Old Ynysybwl would have been like 95% of Wales, a sparsely populated rural area with Welsh the dominant language. The immediate surroundings would have consisted of small farms and meadows in a quiet and completely rural valley; the rich seam of coal that lay beneath the surface had only been tapped to the amount required to supply the local farms. Apart from obviously agricultural workers, the small local population would have included a blacksmith, timber-man, mason, shoe-maker, tailor and miller; their whole worlds would have probably revolved around an area of ten square miles or so. Nowadays locals would give their address as Ynysybwl near Pontypridd; back then it would have been Ynus-y-bool near Newbridge. Indeed much of Old Ynysybwl would still be familiar to Evan I today – the mill house still exists, the River Clydach still flows unpolluted down to the Taf, the railway has come and gone, and of course the old family home is still there – even if it is now full of strangers drinking beer and playing darts!

Evan I had married Ann(e) Evans under license at St. Gwynno’s Church Llanwynno on the 10th of December 1791; confusingly our Family Bible gives the date of the wedding as 13/12/1791. Twenty three year old Evan had applied for the marriage license the previous month, on November 22nd. His bride, incidentally, was only one month over the legal age for marriage back then – 21. At the time of Evan and Ann’s wedding, St. Gwynno’s was not the imposing stone structure we see today, but was constructed from timber, wattle and daub. But apart from that, and The Brynffynon Inn across the road, Llanwynno’s secluded location, nestling in the lea of bleak windswept Cefn Gwyngul, gives little indication of the massive changes that have occurred in the rest of Glamorgan since Evan and Ann were born. At that time, King George III of Hanover was on the British throne and the start of The Industrial Revolution was still over a decade away. Merthyr Tudful would have been the only really large local conurbation, and the floors of the South Wales valley’s would have been full of trees and not terraced houses. There would not have been a coalmine in sight, and it would be over a century before the new pit village of Ynysybwl would spring up to dwarf Evan and Ann’s home village of Old Ynysybwl.

Evan and Ann went on to have six children, only three of whom would reach adulthood. Sadly child mortality was to be an all to common occurrence for this, and future generations of our family over the course of the next century. All six of Evan and Anne’s children were baptised soon after birth up at St. Gwynno’s; this turned out to be a wise move, as tragically three of them would not even make it to their 1st birthday. The eldest child, a girl named Rachel, was born almost exactly a year after the wedding on December 14th 1792. She was remember, the child mentioned in farmer Thomas Moses’ will. Rachel would go on to marry a William Lewis on April 20th 1813, with her father as a witness. The next child was not so lucky; named after his father, Evan II, born on February 5th 1795, only lived for eight days. It must have been a traumatic nineteen months for the family, as the next baby, Rebecah I, born just ten months later on December 20th, lasted barely nine months, dying on September 17th 1796. The next child, confusingly another Evan III (our direct ancestor) born on August the 8th or 9th 1797, would thankfully do considerably better than his late namesake; living to the ripe old age of 82. There was another girl born on February 8th 1800, and again she was called Rebecah II, but she fared even worse than Rebecah I, dying three weeks later on March 1st, which must have put a bit of a dampener on the St. David’s Day celebrations. Youngest sibling Ann II arrived on January 15th 1802, and she would remain a spinster, living with her brother Evan III’s family until his death; indeed she only outlived him by 11 months, dying on January 22nd 1881. The custom of giving a child the same Christian name as a dead sibling must seem strange to us today, macabre even, but back then it seems to have been a fairly common practice which was later taken by Evan I’s Grandson Charles Moses to almost surreal proportions.

Evan I and Ann were both well known local characters. Evan was an educated man, bi-lingual, a school teacher for a time, and a “rhymer” or someone who put his thoughts down in verse. His wife Ann, later better known by her nickname Nani Hendre Rhys, was born on October 20th 1770, according to the Family Bible, at a place called “Ty Yneyfvern“. As there is no letter V in the Welsh language, her birthplace almost certainly should be Tyn-y-wern, which is near the site of the former Lady Windsor Colliery. It later became a Victorian mine manager’s residence, and still exists today as a three star country guest house. Ann was renowned for her famous Ynysybwl pie and “pasties“, which she made for the village, the Church and the annual Ynysybwl Fair. The “pastai” was a local custom, rather than a savoury snack from Cornwall, and it sadly died out with Ann. After her passing a modified form of this custom was held, where all and sundry were invited to a farm or public house where a huge pie had been made, and for a few coppers you could eat as much as you liked.

Both Evan and Ann get posthumous mentions in “Hanes Plwyf Llanwynno“, or a history of Llanwonno Parish, a book written between 1843-1890 by the Rev. W. Thomas, or Glanffrwd to give him his bardic name. In it Evan is described as “The old man, the first Ifan Moses” and “The Parish schoolmaster for a time” – which might be a polite way of saying for not very long! He was apparently in the habit of giving his pupils words or phrases as they left school, to be repeated the next day in both Welsh and English. One such phrase was – “Wyad a marled a neidr y dwr“- “Duck and drake and water snake“. Interestingly, lessons at the time would have been held in local dwellings which had been registered as places of religious worship; as Evan’s home was not registered until 1813 (read on), that would mean he was 45 years old before he turned to teaching – presumably before then he would have earned his living from farming. Ironically, two generations later, all nine of Evan I’s grandchildren by his son Evan III, would turn out to be illiterate Welsh speakers. Presumably that generation were withdrawn from school as some sort of protest over the mid-19th Century English decree that all Welsh schoolchildren had to be taught solely through the medium of English. Back to Evan I, and one of his verses which he sent to the first husband of the old lady Mari of Gelliwrgan, was published in “Hanes Plwyf Llanwynno” and it went:-

“The man from Gelliwrgan,
If your alive and well,
Go early on the shortest day
To the door of the little yard.
Between two sides of Gelli fields
If the sky is blue and clear
And free from any cloud,
The sun will cast his shroud.” 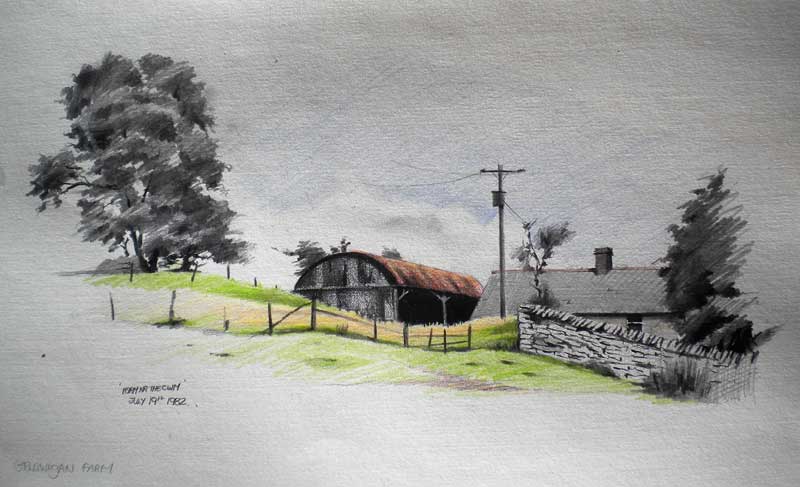 Evan was here recalling an image from his childhood, which was meant to draw the man’s attention to the direction of the sunrise on the shortest day of the year, St. Thomas’ Day. 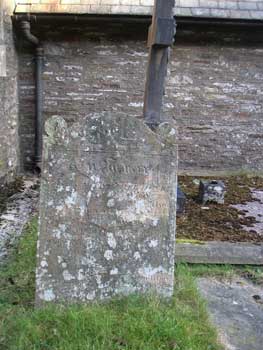 The very first headstone to the right of the main entrance at St. Gwynno’s
Church Llanwynno – and it commemorates our Evan (I), his wife Ann (I),
and their daughter also called Ann (II).
© 2005 Leighton Moses

Five years before Evan and Ann had got married, nonconformity had come to the Parish of Llanwynno (in 1786). As part of a great religious revival, some itinerant preachers including John Wesley and Hywel Harris, preached at several local hillside homes; most notably Rhyd-y-Gwreiddyn. These famed preachers converted many Llanwynno families to their own personal folds of nonconformity. The seeds sown by these preachers would have important ramifications for our family; not least for those of us who still have Moses as their surname. This evangelical revival was a backlash against The Enlightenment, leading to the founding or reconstitution of many evangelical Christian organisations. In Wales this coincided with a surge in nationalism, and non-conformity would become a focal point for this. The established Anglican Church was regarded by many Welshmen as an alien presence, and so many people took to worshipping in nonconformist Welsh Chapels instead- a tradition which would become pivotal in the life of our family over the next four generations. Evan and Ann (Thomas) now took things one step further, as sometime between 1802-1813 they changed the family surname back to Moses. We know this as on the 27th March 1813, the family home Ynus-y-bool was registered by Evan Moses as a place of worship for dissenting Particular Baptists; there would have been no purpose built Chapel’s in Cwm Clydach at this time. Evan I was remember, born a Thomas, got married as a Thomas and all six of his children were born Thomas’ – indeed three of them died with Thomas as their surname. In parts of Wales in the early 19th Century, Anglicised surnames (such as Thomas) were actually seen as “slave names”, and so many Welshmen decided to use the patronymic system again or choose an obvious Biblical name to make a very public statement about their devout Christianity – the surname Moses ticked both boxes! My cousin Glyn Moses was certainly glad of this name change when he started researching the family history some six generations later – there are certainly a lot more Thomas’ in South Wales than there are Moses’! With Ynus-y-bool now licensed for religious worship, it’s location no doubt came in handy as full immersion baptisms could be carried out in the adjacent River Clydach – even in winter!

Finally and sadly, Ann Moses died on July 20th 1824 aged just 53; and so her early demise meant she did not live to see any of her nine grandchildren born to surviving son Evan III, making her nickname “Nani Hendre Rhys” somewhat ironic. She was buried two days later on the 22nd of July at Llanwynno. Evan I outlived her by six years, dying on January 7th 1830 aged 61; he too was laid to rest two days later, with his late wife.

In the next chapter we shall move approximately two miles away, whilst still remaining in Cwm Clydach, and follow the full and eventful life of our direct ancestor Evan III and his large family up at Hendre Rhys Farm. * – see Family Tree II