The last of Evan III and Catherine Moses’ children to be born at Ty Cornel ger Ynus-y-bool in the Parish of Llanwynno, before the family moved up to Hendre Rhys, was Charles. The third of four consecutive boys, Charles arrived at 3 o’clock in the morning on April 17th 1838 and his father was described as a “Church Clerk” on the birth certificate. His Christian name comes from his mothers family – she had a brother Charles (Miles). Charles Moses would later turn out to be a man who was to birth control what Elvis Presley was to healthy eating, as he tops the Moses procreation league with a whopping 13 children, spread over 27 years and two wives! Charles married Ann Lewis from Trefforest on April 27th 1859 in Church in the Parish of Llantwit Fardre. He was described on the certificate as a “Cutter“, although we do not know what it was he was cutting. Ann, the daughter of publican Lewis Lewis, was at 22, a year older than her husband. Their first child, a boy called Alfred, arrived sixteen months later down in Trefforest on August 24th 1860, where the couple were living with the Lewis family. By the time of the birth, Charles had become a “Chain Striker“, possibly at the nearby Newbridge Chain Cable and Anchor Works (later Brown Lennox) which had opened in 1818.

There was then a gap of nearly five years before the next arrival – a daughter Mary Ann, who was born in the Castell Ivor Public House on April 8th 1865; presumably Ann’s father was now the landlord of this establishment. The present day Castell Ivor Pub on Jenkin Street, Hopkinstown Nr. Pontypridd, is built on the site of the original Inn. Mary Ann’s birth certificate informs us that Charles had changed jobs again – he was now described as a “Coalminer“. Sadly another certificate tells us that his wife Ann had died giving birth to their daughter the previous day (April 7th); I wonder how she managed that, perhaps it was on the stroke of midnight! Curiously the grieving Charles registered Mary Ann’s birth the very next day, but does not register his wife’s death until May the 17th – same Registrar as well! In the five weeks since the tragedy, according to the death certificate, Charles has got himself yet another occupation – he was now a “Breaksman“, which involved the controlling of haulage ropes on a self acting incline, almost certainly at a colliery. Also on this certificate he is less specific about the place of his wife’s death; opting for a rather vague “Cwm Rhondda“. With their lives turned upside down, Charles and five year old Alfred retreat back to Hendre Rhys Farm, whilst new baby Mary Ann was left with her maternal grandparents. This seemed to be an accepted custom back then when one of the parents died prematurely; a custom which was to continue in our family (sadly) even up to and including my own father’s generation.

After only 22 months as a widower Charles remarried; but young Alfred remained at Hendre Rhys to be brought up by his grandparents – what amazing people they must have been. As if to emphasise this “fresh start”, in the next census (1871) the young “Scholar” was given a new middle name by Evan and Catws – John. As it was quite common for Welsh people to be called by their middle name, presumably the youngster suddenly became John Moses! Interestingly though, “Alfred” ditched his new name when he later left the farm. 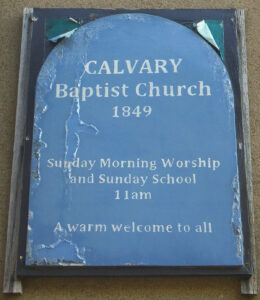 Wedding number two for Charles, took place back down in Trefforest on the 16th of February 1867 at the Calvary Chapel. Wife number two was 23 year old spinster Ann or Hannah(as she is referred to on 11 birth certificates) Lloyd, the daughter of “Banks-Man” David Lloyd. Amusingly it seems the Registrar was not a Welsh speaker, as (H)Anna(h)’s address on the certificate was given as “Tee (sic) Hafod“! Ty Hafod was the estate in Hopkinstown, just north of Pontypridd, where Charles’ elder sister Ann had once worked. “Dressmaker” (H)Anna(h)was already a couple of months pregnant when they got married and the newlyweds set up home at Fair Oak, Pontygwaith in the Rhondda Fach, where Charles was living and working as a coalminer. A daughter Catherine, deservedly named for Charles’ mother, was born there seven months later on the 28th of September.

The family had moved by the time the next child arrived; Gwenllian (or Gwendoline) was born on the 20th of July 1870 at Rhiw yr Ychen/Hill of the Oxen, which was only about a mile away from Hendre Rhys on the slopes of Cwm Rhondda. The following years census finds the Moses family now based in the “Brittania” district of The Rhondda; this was a sub district of Cymmer, just south of the town of Porth. From now on Charles and (H)Anna(h) must have been on first name terms with the local Registrar, Mr. Davies, as babies continued to come thick and fast. Rebecca III arrived on 23/1/1872 at another Public House – The Ivor Hael at Llwynypia, half way up the Rhondda Fawr; his wife giving birth in a pub must have brought back some bad memories for Charles. The next year saw another new address; the family had made the short move to Penygraig, where Charles’ brother Moses Moses was living on his return from the U.S. – and another new arrival. Named after her mother, a fourth consecutive girl called Hannah (II) arrived on the 12th of October 1873. Just 14 months later, and the girls get a brother when Evan was born on the 2nd of December 1874; he becomes No. VIIII in our list of Evans. There was then a break of nearly three years before David Charles was born on August 23rd 1877, and his birth certificate tells us that his father was now a “Colliery Overman“. This meant he was “almost invariably a man who had passed through all the graduations of pit work, and had been raised to his situation on account of his ability and steadiness“.

By the time of Charles and H(A)nna(h)’s seventh baby in 1879 they had sadly seen two of their offspring die as infants – Hannah II only lived for three days, whilst Evan VIIII managed three years. This last death would explain why the baby born on November 13th was yet another Evan (XI), with Thomas as his middle name. The family’s address was now given as the more specific “Hendregwillim“. Hendregwillym still exists today In Penygraig, running parallel with the A4119 up the Rhondda Fawr. 1881 saw yet another child who was named for a deceased sibling – Hannah III (later (H)Anna(h) Maria) was born at Hendregwillym on the 2nd of January. Shortly afterwards, according to the 1881 census, the Moses family had moved, judging by the address, to a very long street – 339 Penygraig Road! There now followed a spate of “Sarah’s” between 1883-87 – Sarah Ann (b. Penygraig 19/5/1883), Sarah Jane (b. Peny-graig 14/3/1886) and Sarah Jane II (b.”Trebanog Cymer” 9/10/1887). The reason behind this was that Sarah Ann only lived for two hours!, whilst the first Sarah Jane died aged one year and seven months. You get the distinct impression that Charles and H(A)nna(h) wanted to be survived by a child called Sarah! In the end Charles outdid his grandfather and gave four of his children the same Christian name(s) as a dead sibling; he obviously did not believe in making life easy for me and Glyn when we started researching the family history, especially with two Sarah Jane’s born in consecutive years!

Charles, who was by now pushing 50, and his wife in her mid-forties, now decided to call it a day with seven out of their 11 children surviving to reach adulthood. Although of course Charles had two surviving children from his first marriage; surprisingly (or not) neither of whom were invited to join his new family. The census of 1891 finds 5 Vestry Row Trebanog Nr. Porth, crammed full of this branch of the Moses family – well ten of them to be exact! All the children, except Catherine who was married, were still living at home with Charles and H(A)nna(h), plus they were joined by Rebecca’s husband and baby son. The next census of 1901 gives the address of Charles’ penultimate move – 68 Cym(m)er Rd. Porth, which was only a stone’s throw from where his sister Janet Thomas (nee Jennet Moses) was living with her family. In this census entry there were now only three children still living at home along with Grand-daughter Rebeccca IV, the illegitimate daughter of Hannah Maria, who was not one of those living at home. Charles ended his working life as a “Colliery Carpenter” or “Sawyer” and after at least 12 different addresses, ended his domestic life at 22 Cymer Rd. the home of his youngest daughter and her family. Also living at this address was his wife H(A)nna(h) and two bachelor sons, plus an illegitimate 12 year old granddaughter thrown in for good measure!

Charles eventually passed away aged 68 on the 28th of November 1908 at No.22 from “Chronic Bronchitis Syncope“, and which one of his nine surviving children was present at his death? It was none other than Alfred, the child he had “parked” at Hendre Rhys 44 years earlier to start on family number two. Father and estranged son had presumably remained close; either that or Alfred was very understanding! 1908 was not a great year for the “Farm Generation”; Charles’ brother Evan IV had died in the U.S. the previous summer, whilst sister and neighbour Jennet, passed away the following month on Christmas Eve. Meanwhile Charles’ widow H(A)nna(h) died just over four years after her husband on the 23rd of January 1913 aged 70, again at No.22 Cymer Rd., after blacking out from a combination of heart disease and a brain haemorrhage – son-in-law Thomas Price (Sarah Jane’s husband) was in attendance. Charles and H(A)nna(h) Moses are buried together in the nearby Trealaw Cemetery (Porth Cwm Rhonda) with one of their children – middle son David Charles Moses.