When visiting the farms, ruins and pub(!) that the Moses family once called home, I often find myself thinking, what if our family were still living here.  Looking around at the locations, the views, the peace and quiet, surrounded by nature, I wonder why our ancestors would swap all this for a terraced house and a working life spent down a coal mine.  Of course it was not always that idyllic – just imagine what it would have been like during a severe winter; cut off from the outside world with no electricity, running water etc.  And as well as that, the important thing to point out is that our family never actually owned any of these addresses – they were tenant farmers who had been granted leases and so had to pay rent to English landlords.

On that last point, perhaps their frustration/resentment can be best summed up by a stone plaque above the door of the outside toilet(!) of Gelliwrgan Farm.  It reads “Not my own, my native land” WM Jones June 18th 1860.  Like me, WM was a descendant of Evan (ap) Edward, and the quote was a subtle and deliberate misquote from Sir Walter Scott’s patriotic poem “My native land”.  He was having a dig at English landlords in general (and the Kemeys-Tynte family in particular) for treating their Welsh tenant farmers as subservient and forcing them to pay rent for land which should have been theirs by right in the first place.  Incidentally the aforementioned outside toilet (Ty bach in Welsh) probably dates from the 17th Century. 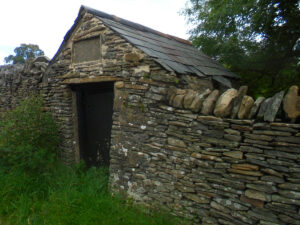 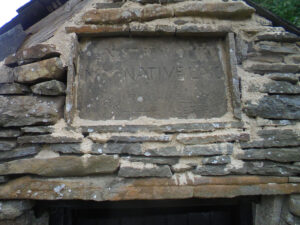 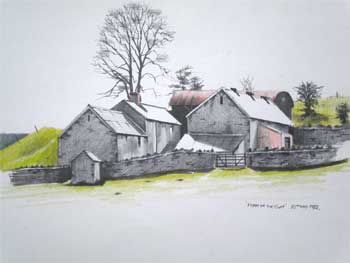 Drawing of Gelliwrgan by Leighton Moses May 1982 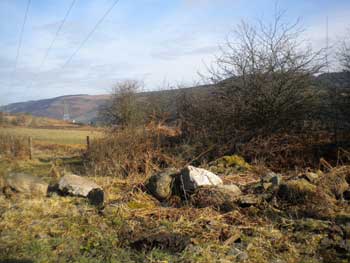 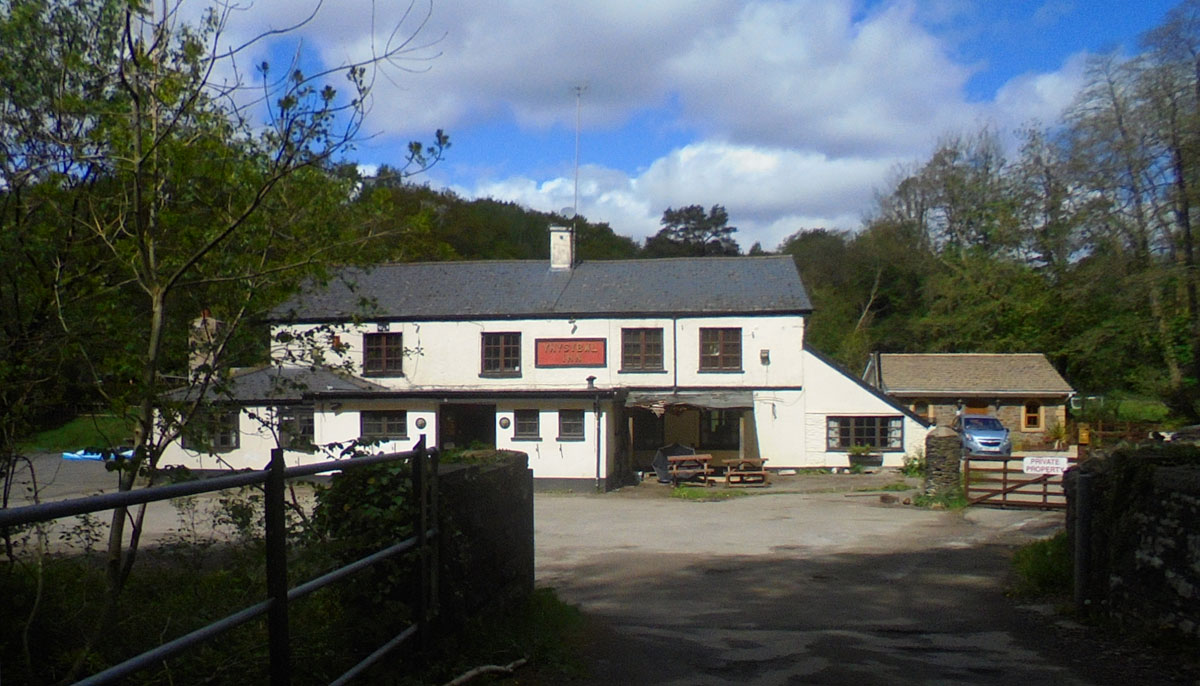 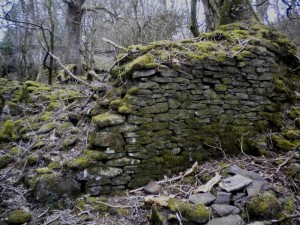 The ghostly remains of Cwm and Ty Cornel” 2016 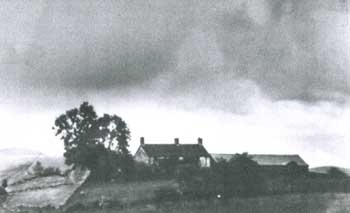 Hendre Rhys in its prime in the late 1930s. A rare photograph of the farm sitting at the top of the path which leads from the footbridge over Llys Nant at the foot of Twyn y Glog. The unknown photographer was actually photographing the clouds, the farm just happened to be there!

Gelliwrgan or Gwrgan’s Grove is now a double barn conversion near Perthcelyn in Rhondda-Cynon-Taf CF37 3PG South Wales. Gwrgan ap Ithel (born circa 953 AD), was one of the old kings of Glamorgan. He gave “The plain called Gwrgan’s Long Meadow in the Glyn (valley) Rhondda to his poor subjects in perpetuity“. Perhaps the farm, which was later licensed as a place of worship for dissenting Particular Baptists between 1782-1816, was part of this land. The earliest documented mention we can find of Gelliwrgan, once a three unit Welsh longhouse, is 1540, although the current buildings date from 1616.  Later on, in the 18th Century, the 274 acre farm was owned by the Kemeys-Tynte family who leased it to local farming family’s. The farm is the first address mentioned in our family’s history, when the Family Bible stated that Evan or Ifan I (ap)Thomas (later Moses) was born there on the 22nd of September 1768. Confusingly, according to land tax assessments, Evan/Ifan’s father (Thomas Moses) was listed as the farm’s tenant between 1782-83 and at the time of his death in 1798 (see Wern goch below).  Previously at various times, Gelliwrgan had been leased by both Thomas’ father-in-law and brother-in-law. 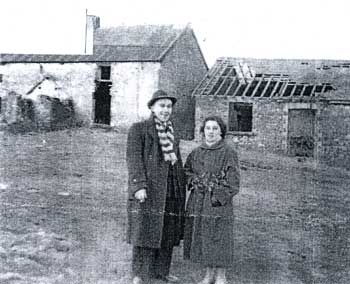 Farmer Evan Moses’ Gt.Gt.Grandson Myrddin Pugh and his wife Thelma outside an unoccupied Hendre Rhys in the winter of 1947. Four years before the Forestry Commission turned up with some dynamite

A mere ten minute walk down the road takes you to the ruins of Wern goch / Red alders, which is now just a pile of overgrown stones and completely unrecognisable as the former dwelling of our earliest known Moses ancestors – Thomas Moses and Sarah Evan. Our immediate family lived here until 1798.  Wern goch, which could also be translated as “red swamp“, was separated from Cwm Clydach by Foelydduallt (the summit of the dark slope).  To give you some idea of the local landscape before the coming of the coal mines, in 1804, 255 oak timber trees growing in Penrhiwceiber and Wern goch were advertised for sale.  Growing to the east of the farmland, the timber would have been turned into charcoal for use in in the smelting of iron.  By the end of that century, the oaks would have been replaced by rows of terraced houses. 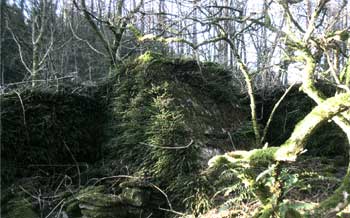 70 years on, and only the foundations remain.
© 2010 Leighton Moses

A fifteen minute walk, dropping down to the floor of Cwm Clydach, finds us on the banc’s of the river outside The Old Ynysybwl Inn CF37 3LS. We can be 99% certain that this was the former home and farm of our ancestor Ifan /Evan Moses, when it was known as Ynus-y-bool / Bowling greens or Green-meadow Farm. Inbetween being a farm and an inn, it was registered as a place of worship for dissenting Particular Baptists (on 27/3/1813) which enabled it to be also used as a school building. Our family lived here from at least 1797 until 1830.

Following Evan I’s death in 1830, his newly married son (Evan III) moved a short distance (north) away from Ynus-y-bool. This new address was Ty Cornel, or the Corner House, and it represented a short break from living on a farm. Ty Cornel was almost certainly part of an “entire village” called Cwm which has long since disappeared. Presumably the houses were in the path of the old railway line which at one time continued for about a mile beyond the Old Ynysybwl Halt. This line was only used for agricultural and coal traffic. Cwm was at one time larger than Ynus-y-bool/Old Ynysybwl and was centred around the wool trade; it even had a fulling mill (or pandy in Welsh). We know that some of the houses around the mill had short descriptive Welsh names such as Ty Canol, Ty Coch and Ty Draw. It is reasonable therefore to assume that Ty Cornel was part of this community. Less than a decade later, it was to be a return to a farm house for the Moses family.

The fourth and final farm, and the one most closely associated with our family, is a couple of miles south-west on the opposite and top side of Cwm Clydach. Hendre Rhys or Hendra Rees (Rees home/main family farm, or Rees winter dwelling) was the Moses family home from 1840 until circa 1888. Sadly even being an unscheduled ancient monument could not save the farm building’s from being blown up (literally) by our friends at The Forestry Commission in 1951. Today the ruins sit in the midst of the St. Gwynno Forest – “Quite eerie sitting there and imagining the past … you can really touch it there.” Way back in 1577 the farm was known as Tir Hywel Laythog, which translates as “Hywel’s land rich in pasture resulting in good yield of milk from cattle”.  The Hywel in question was a monk or possibly a lay brother, who farmed the land for the benefit of the monks of Margam Abbey.

We know that on February 12th 1800 a Jane Meredith was born at Hendre Rhys to John and Jane Meredith. Between 1837 and 1839 Evan and Jennett Evans were farming there; we know this as they had two children born there – Robert (10/9/1837) and Ann (9/3/1839). It seems likely that Evan Evans was the nephew of Ann Moses, the mother of Evan III Moses who took over the tenancy in 1840. Interestingly an account of a lightning strike on Hendre Rhys, which killed a mare, appeared in the “Pontypridd Chronicle” on 9/11/1894.