The third of Evan III and Catherine’s children was yet another Evan (IV) Moses; he was born once at Ynus-y-bool Cwm Clydach Glamorgan on the 5th of May 1835, and died twice in the U.S.A. in 1881 and 1908 – all will be explained later! The new arrival was Christened the following month at St. Gwynno’s Church Llanwynno on June the 14th.

Nineteen years later, and it seems highly probable that, as a young man, Evan got carried away during the Christmas festivities (of 1854) and gave a young lady from a neighbouring farm a “present” in the shape of a presumably unplanned pregnancy. For the full story see the chapter on Edwin Davies/ Moses. No shotgun wedding was forthcoming, so we have to assume that Evan had no intention of making Sarah Davies another Mrs. Moses. If he had done so, he would have been a 20 year old widower the following September, as tragically Sarah dies five days after giving birth. Evan’s parents then came to the rescue and adopted baby Edwin, allowing him to get married four years later with no “baggage” in tow. Not that Evan got off Scot free, as it seems likely that this “financial responsibility” would later delay his plans to emigrate to the U.S.; instead of leaving with his younger brother Morgan in 1866, he had to wait until Edwin reached working age. Evan continued to live up at Hendre Rhys until he got married, although he worked as a “Striker” (probably at the recently opened iron foundry and coke ovens, a couple of miles away in soon to be Hopkinstown), rather than helping with the running of the farm.

Twenty four year old Evan, got married at St. Gwynno’s Church Llanwynno on November 12th 1859; interestingly his bride was “Church” rather than “Chapel”. The bride in question was 23 year old Lydia Walters who was born in the Parish of Llanwynno on the 20th of October 1836 and was the daughter of Evan and Ann Walters of “Nantrysa” (should be Nantyrhysfa) Farm. Lydia was one of 11 children; her parents actually had eight in six years! – a set of triplets if you are wondering. Evan and Lydia Moses began married life living down in Taff Street, which was and still is, the main street in the nearby town of Pontypridd. Evan is now variously described on census and certificate entries as either a “Chain maker” or “labourer“. Almost exactly a year after the wedding, Lydia gave birth to their first child, and it’s yet another Evan (later Evan W.), born in Pontypridd on 24th November 1860. This baby now becomes Evan VII – I hope you are keeping up! Curiously, on the boy’s birth certificate, Lydia was called “Lydia Morgans” – Morgans was then crossed out by the registrar who replaced it with “Moses“. This same mistake will bizarrely occur again later on in a U.S. census entry after the family had emigrated – maybe illiterate Lydia also had a speech impediment!

Two years on, and baby Evan was joined by a sister Anne or Anna, who was named after her maternal grandmother. There was then a gap of four years before the next arrival – Moses II. This baby was born on July 9th 1866 at “By Church Ystradfodwg” which was at Ton Pentre, halfway up the Rhondda Fawr. Evan had moved his family here, for from 1864 onwards the coal mines and levels were booming in this part of the valley. In 1865 the lower part of Ton Row was built for the miners and their family’s to live in; it was here that the Moses family moved to – incidentally Ton Row still exists today. However, it was to be a tragic start to life at this new address as baby Moses died there on the 7th March 1867 from “Infantile Intermittent Convulsions” aged just eight months. This was the third grandchild that Farmer Evan Moses III and his wife Catherine, back at Hendre Rhys, had lost in the previous nine years. Moses Moses II was buried in a second family plot at St. Gwynno’s Llanwynno. Touchingly on the headstone Psalm 127 v.4 was inscribed for him :- “Psal 127 A3 (sic) Wele plant ydynr eui feddiaeth yr Arglwydd ei wohr ef yw ffrwyth yr groth“. Translation :- “Lo, children and the fruit of the womb: are an heritage and gift that cometh of The Lord”. Moses II would be joined eventually (1880 and 81) in this plot by his paternal grandparents. Sadly the year before, another grandson, and the 1st cousin/namesake of the deceased (Moses Moses III) had also died as a child; this Christian name was now probably associated with bad luck and never appears again in our family. Just over a year after their baby’s death, Evan and Lydia had another child – Walter, born on May 1st 1868 at Ton Row. Before the newcomer, who was so named for obvious reasons, gets a chance to develop a Welsh accent, the family emigrates to the U.S.A.

Coalminer Evan was following in the footsteps of his younger brother Morgan, who had left South Wales for the U.S. nearly three years before. The book “The transformation of a boy to a man in the coal mine” by E.H. Jobson claims that the brothers set off for their new life together; but in reality Evan, or “Eben” as he was erroneously described on the ship’s register, arrived alone in New York on April 27th 1869 aboard the steamship the “City of Antwerp”. Lydia and the three children followed later, but curiously not together. I presume baby Walter was brought over by his mother later that year; Evan W. came over in 1872, whilst Anne did not arrive until 1875! We do not know who accompanied the children on the long, fraught crossings; presumably relatives or close friends. There must have been some highly emotional scenes back in South Wales, as elderly parents waved farewell to children and grandchildren, knowing almost certainly they would never see each other again.

Even in 1869, New York must have been quite an eye opener for someone raised on Hendre Rhys Farm – “amazement and wonder” to quote Jobson’s book, as Evan arrived in the Land of Liberty enroute to his eventual destination of Audenried Pennsylvania. Initially we could find no trace of the family in what should have been their first U.S. census of 1870 as, for some reason, they had registered under the nom de plumes Evan E. and Lydiah Morgan! – note the surname Morgan again. Presumably there was nothing underhand going on here, with probably illiteracy and a limited grasp of the English language the reason behind this. The couple registered at the Centralia post Office in Columbia County PA; giving their ages as both 35, and their personal wealth as $200. In this same census, Evan and Lydia’s next door neighbours were future in-laws the Fetterman’s, and close by lived the ridiculously wealthy mine boss Harry (Henry) C. Frick, who would later feature prominently in the life of Evan’s nephew Tom Moses. In the next census of 1880 (they were by then living in Luzerne Co. PA), the problems of being Welsh speakers in a foreign land, coupled with illiteracy, resulted in different spellings of Mr.and Mrs. Moses’ Christian names – Even and Liddia. Besides (for a time) having his brother and his family living close by, any feelings of homesickness Evan may have had, would no doubt have been eased by the fact that Welsh people were emigrating in droves to the U.S. around this time – one County in Pennsylvania was even called Cambria! There was no going back for Evan the “alien“, as on the 7th of November 1880, he renounces his allegiance to “Victoria Qeen (sic) of Great Britton (sic) and Ireland” and becomes a U.S. citizen. It had taken eight years to complete this process; his application had been submitted on October 6th 1872 in Luzerne Co. PA. Curiously on the application, Evan’s DOB has shifted from the 5th to the 28th of May 1835. Evan’s “petition” was heard on the 1st of Oct. 1880, and he was vouched for by a Richard R. Griffith(s), who had to swear before “the Honourable Judges of the Court of Common Pleas of Luzerne County” that he was “well acquainted” with our Evan who “during the same period” had “behaved himself as a man of good moral character, attached to the principles of the Constitution of the United States, and well disposed to the good order and happiness of the same“. It was lucky they did not take into account spelling, as Evan spelt his name “Mosses” on the petition!

Meanwhile Evan and Lydia’s Welsh born children were joined between 1871 and 1881 by four American born (Luzerne Co. PA) siblings – William (27/7/ 1871)/ Thomas Howard (1/1/1876)/ Lydia II (1878) and lastly Mary Jane or May (Circa 1881). Right then, back to that teaser at the start about Evan dying twice. In the book “The transformation of a boy to man in the coal mine“, there is a heart-wrenching moment when “Uncle Evan” is crushed to death underground by a moving trip of loaded coal tram’s in Lucas Iowa in 1882, not long after his brother Morgan’s own fatality. Why this incident should have been so wrongly “retold” to the author by Evan’s nephew Tom, is not clear. Whilst Evan may have indeed had an accident whilst working underground in a coalmine, reports of his death seem to have been greatly exaggerated! In reality Evan dies a lot older, and certainly a lot more peacefully, on June 13th 1908 at the home of his son-in-law Ulysses G. Fetterman in Hazelton PA. In fact, it seems likely that the unfortunate person crushed to death was in fact Evan’s nephew, also called Evan; although how anybody could confuse the death of an 11 year old sibling with an uncle in their forty’s is quite mystifying! By 1908 Evan IV Moses had definitely died (14 days after a stroke), and his death certificate was quite specific about his age when he did – “74 years, 5 months and 7 days” – wrong, he had only celebrated his 73rd birthday the previous month. This error was probably because the certificate wrongly gives Evan’s birth year as 1834; either way he had certainly not forgotten his roots, as his funeral was held at the local Baptist Church. Lydia outlived her husband by 11 years, dying in February 1919 whilst she was living with her daughter Liddia and her family. She is buried at the Vine Street Cemetery in Hazelton PA alongside Evan. 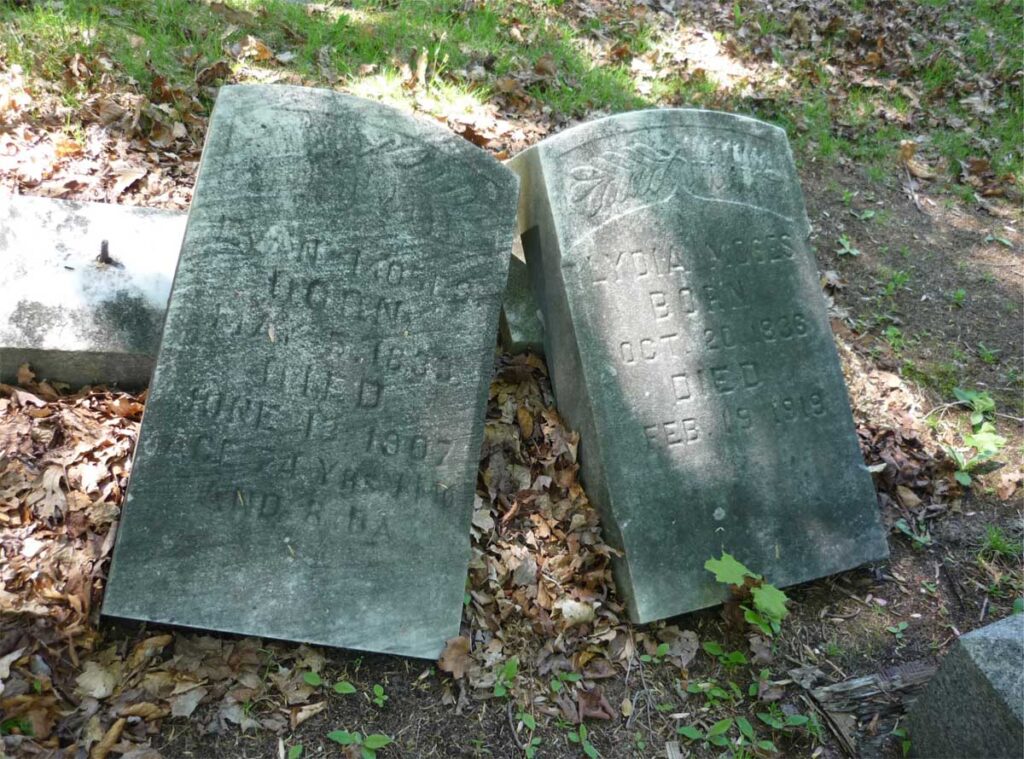 Born and buried close together. On Evan’s headstone, both his dates of birth and death are incorrect. It states he died in June 1907, a year exactly before he actually did. I joked earlier about him dying twice; surely he never managed it three times!

Finally back to South Wales, and the farms that Evan and Lydia had once called home, both eventually suffered similar fates – like Hendre Rhys, Lydia’s Nantyrhysfa was also unceremoniously demolished; the ruins now sit in a peaceful woodland glade, popular with walkers and nature lovers.

So Evan and Lydia would have met as young children, as their homes of Nantyrhysfa and Ty Cornel were less than a mile apart. 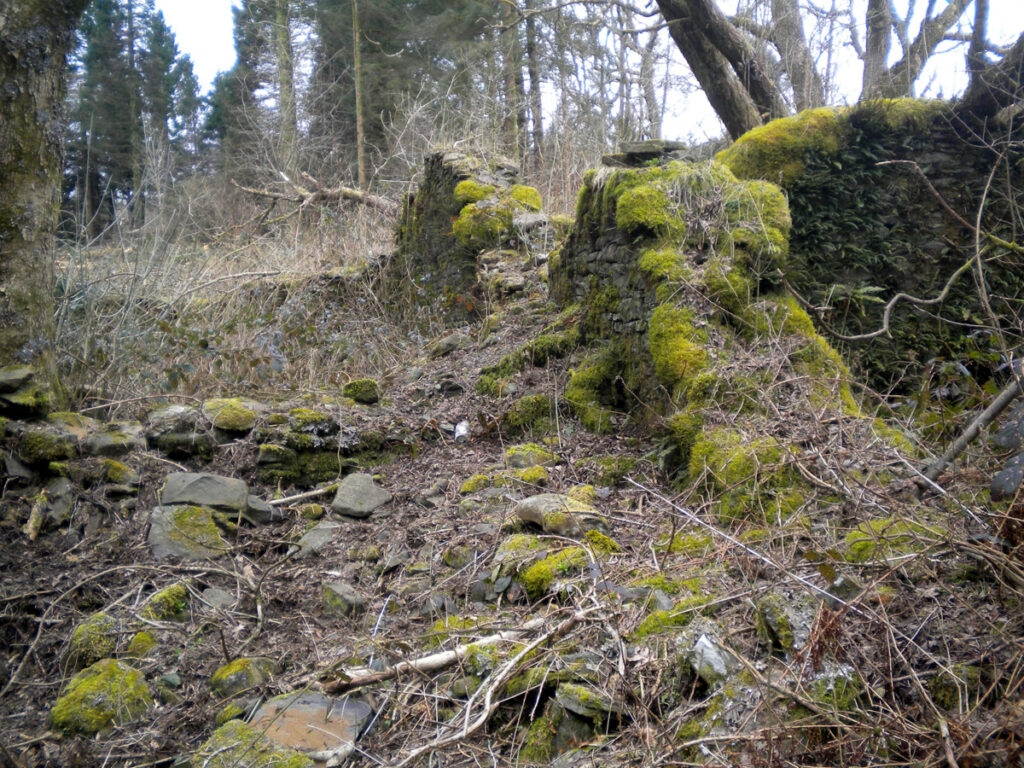