“Mamgu” was born Catherine Thomas in Gilfach Goch “Rhondda” Glamorgan in 1869, and was a daughter of William and Catherine Thomas (nee Phillips). Her father William was born in 1833 at St. Mary Hill in the Vale of Glamorgan and, in the census of 1851, he was a single farm servant of Bryn-cwtyn Pencoed (Nr. Bridgend Glam.). By the time of the next census he had got married and he and his wife Catherine were living at Llewellyns Row Llanharry. There was about a nine year age gap between the couple; Catherine was born in 1841/42 just up the road from St. Mary Hill, in Llanblethian near Cowbridge. In this 1861 census, William was still an agricultural labourer and his wife was described as a dress maker. Catherine’s birthplace of Llanblethian is today a highly exclusive village, and it was here that their son John was born in 1865. By 1871 the family had moved to Gilfach Goch, inbetween the Ogmore and Rhondda Valley’s. The first pit had opened there in 1868, and not surprisingly William had swapped the “land” for the coalface. It was whilst living here that Mamgu and her older sister, Mary Jane (1867), were born. It was all change for Mamgu by the next census of 1881, she was now living with her widowed nan, Mary Phillips, who was an inn keeper! Mary was born in Llanharry in 1815 and her “tafarn” was The Globe Inn at Cowbridge. People who knew Mamgu later on in her life would probably find it hard to imagine her living in a pub!

Mamgu became part of the Moses family on August 30th 1890, when she married Gwilym Moses at Pontypridd Registry Office. It is not known how the couple met; according to the marriage certificate Mamgu was now living in Ynysybwl, whilst Gwilym gave his place of residence as Porth Cwm Rhondda. Mamgu’s devout Christian faith was certainly tested to the limit during her lifetime; widowed in her mid-fifties and with two of her daughter-in-laws dying young, she was probably helping to bring up her grandchildren well into her eighties.

Unfortunately Mamgu get’s a bad press from a lot of people.  My father (John Leighton) was distinctly unimpressed with her “parenting” skills and there was certainly no love lost between them; whilst another relative who knew her, went as far as describing her as a “tyrant”!  However another grandson (Dave),who she brought up from the age of seven, seemed to have a better understanding of her personality.  In his memoirs entitled “From the other side”, he described his Nan as a “martinet, strictly Victorian in her outlook”, and with a tongue like a “whiplash”.  As mentioned before, Mamgu lived in her Nan’s tafarn, and from the age of 12 worked there as a housemaid and even emergency barmaid!  It was, it seems, this hard upbringing which was later reflected in her attitude towards her own grandchildren in terms of discipline.

Dave also recalled, that on summer evenings, his Nan would sit outside the front porch of the house (on New Rd. Ynysybwl) on a high backed cane chair, dispensing anecdotes and wisdom to all and sundry.  And finally to end on a lighter note, another childhood memory of Mamgu is recalled by the niece (Olive Clark) of her daughter-in-law.  Olive tells of visits to “Granny Moses” where she and her siblings had to sit on furniture upholstered with horsehair, which made them itch; and if that wasn’t bad enough, they were given milk to drink straight from a goat which was kept out the back! 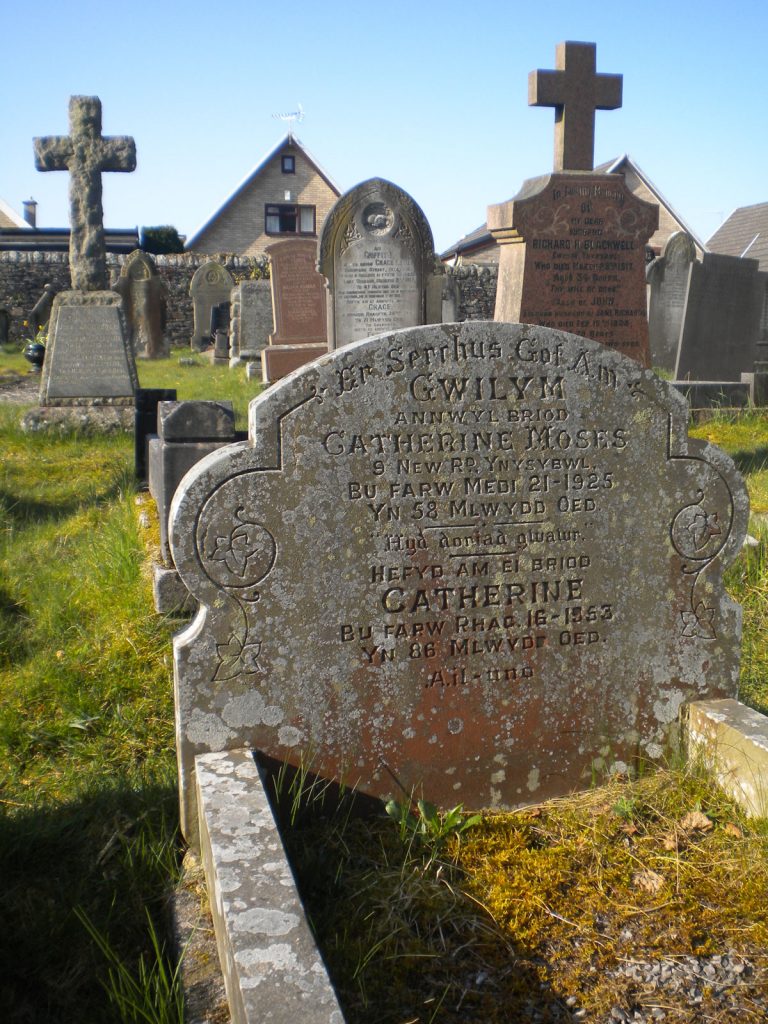 Mamgu and Gwilym I buried together in Ynysybwl Cemetery