The surviving part of the letter sent by Janet Lewis (Canton Ohio) to her Cousin Elizabeth Ann Phillips (Ynysybwl) sometime between 1918 – and 1921.  The text in brackets are my comments.

“…disappointed and say that she (Aredes Reese nee Johns) married a man (Edmund Price) who was not very nice.  She had several properties and the kids were so good to her that everyone thinks she was very foolish; but they say love is blind.  We were over in Youngstown in September.  Albert & Stella (Aredes’ children) each have nice ???? and each have one child.  They are so cute.

Alice (Jenkins nee Johns) has 4 boys, 3 of them are married but no children.  Alice was so anxious to hear about you all (the Phillips and Moses family’s) that she came over here.  She did enjoy the pictures, but I had the wrong gate.  She thinks the one she used to swing on stood just about where the new town is built (New Road Ynysybwl?).  Of course I did not know the town was new, but I tried to tell her just where it was located.  She asked quite a few questions I could not answer.

I hav’nt seen Mrs. Rees (presumably someone else who had also emigrated to Ohio from Glamorgan); you know I am ashamed to talk to her and tell her I came from her home and did not see her people.  She is quite a bit better my sister (Lizzie Miller nee Lewis) says.  Probably some day I’ll pick up courage and call on her.

How are my inquisitive friends up on the hill?  Remember me to them and give my love to the lady in Mothers home (Hendre Rhys?), she was so kind.  If you send me her name and address I’ll write to her.  I met so many people over there that it is hard to recall all the names.  Tell me the names of each member of your family too (The Phillips children).  I have a warm spot in my heart for each one, but really didn’t remember all the names.  You know the cousins I left in Aberdare (possibly the family of her 1st cousin Gwenllian James nee Moses) had nine children and some were married, so do you wonder that I get the names mixed.

The people up at Brecon (Relatives from the Lewis family perhaps) seem to have the notion that I was going to be married when I returned home.  Can’t understand how they got that idea; no one seems to want me.  Auntie said if I came  there to live, they would find a house and have it ready for me.

Father (Richard Lewis) did enjoy hearing about you all, but oh! how I did miss Mother (Catherine Lewis nee Moses) to talk to when I came back home.  The candles are down at the shop (The Lewis family’s retail store) being made into lamps and are going to be so nice.

How are Jane (Phillips, Elizabeth Ann‘s daughter) and her friend (boyfriend?), I am sorry not to have met him.  Well it is time to draw this letter to a close, so goodbye and my very best wishes to you.

PS – If Tom (Phillips, Elizabeth Ann’s son)  plans to come over (To the USA) have him let me know; I want him to bring something.” 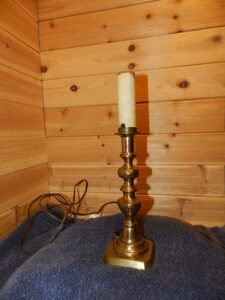 The light shines on, Janet’s candle in Ohio 2020