When people refer to Llanwynno today, they are talking about a tiny hamlet (8 miles north of Pontypridd), which consists of just a Church – Eglwys Sant Gwynno, and a public house – The Brynffynon Inn, nestling in Cwm Clydach which is sandwiched inbetween the much larger Rhondda and Cynon Valley’s in South Wales. Back at the start of the Moses story, Llanwynno would have meant the ancient Parish of the same name in the old County of Glamorgan / Morgannwg. When our ancestors were living there on their farms in the 18th and 19th Centuries, the area was so sparsely populated that the Parish encompassed Abercynon, Penrhiwceiber, Ynysybwl, most of Mountain Ash(Aberpennar), part of Pontypridd, and a third of The Rhondda – Porth, Stanleytown, Ynyshir, Wattstown and Blaenllechau. However once the coalmines started opening, the local population exploded, meaning new smaller Parishes and leaving Llanwynno itself somewhat out on a limb. Before the evangelical revival and the coming of the Chapels in the 19th Century, Llanwynno with it’s Church would have been a focal point for the scattered farming communities; this would explain the large graveyard, which seems totally out of proportion with its surroundings.

Llanwynno and St. Gwynno’s would remain a special place for generations of the Moses family, even post non-conformism – you could say it is the spiritual home of our family. As well as infants being Baptised there, the graveyard contains dozens of family members, many of whom were children who were brought back to Llanwynno for burial by their parents despite them having moved over to the Rhondda Valley’s. 1917 seems to have been the cut off point, with the funeral of Farmer Evan’s Grandson Alfred Moses being the last family event recorded there. You have to go back even further for the last Moses wedding there – 1859 to be exact, when Evan IV married Lydia Walters. For this and previous weddings, the Church building would have been a barn like structure – the Church in it’s current form dates from 1894-96 when a Miss Olive Talbot of Margam paid for it’s restoration in the “gothic style”. Christian worship has been conducted on this site since the 6th Century, when the Welsh saint Gwynno, or Gwynnog ap Gildas to give him his full name, established and eponymousely named it. Our ancestor Farmer Evan III Moses was more closely associated with St. Gwynno’s than any other family member – Baptised, married and buried there, he was even the Parish clerk for a time. During his lifetime, Evan would have had to have given the (Anglican) Church a tenth of his annual income in the form of a tithe; perhaps he worked as the Parish clerk in lieu of this.

Llanwynno, or The Brynffynon Inn to be more exact, was the venue for a Moses family reunion in June 2007. Three branches of the “Farm Generation” were represented – Moses, Mary and Evan IV; the latter being all the more remarkable because they (Tallulah and Cliff Miller) had travelled from the U.S.A. Indeed, five years later, when a descendant (Hilary Elsey) of another of the farm siblings (Jennet) started looking into her Moses roots, Llanwynno was her first port of call. 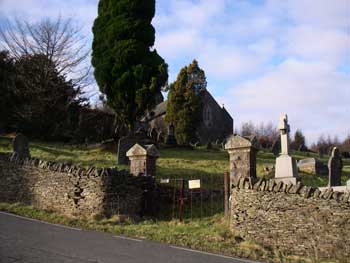 Not a Zulu in sight; the view the choir would have had whilst singing “Men of Harlech”

Finally a teaser for you, what is the link between Llanwynno and the iconic 1964 film “Zulu”? Well when the British soldiers break into their rousing rendition of “Men of Harlech” during the historical war epic, they were in fact miming to a soundtrack recorded in the car parc of The Brynffynon Inn! Improbable as that sounds, it is true. The film’s star, Stanley Baker (who played Lt. John Chard), was from Ferndale, just over the Rhondda side of the mountain, and he also happened to be President of the Ferndale Imperial Singers. The choir were joined by Sir Stanley and another of the film’s stars, Ivor Emmanuel, for the outdoor recording. So the next time you watch the film you just might think of a pub car parc in South Wales! Incidentally there is a famous photograph of the late film star having a pint in The Brynffynon, and indeed his ashes were later (1976) scattered from the top of Llanwynno over his beloved Ferndale. Continuing the Zulu theme, and in a bizarre coincidence, a survivor of the defence of Rourke’s Drift (on which the film was based) is actually buried in the graveyard at St. Gwynno’s. Private Thomas Chester, survived being attacked by thousands of Zulu’s, only to be tragically killed 29 years later in an accident at Ferndale Colliery, where he worked after leaving the army.

PS. If you thought a Welsh Cor Meibion singing to imaginary Zulu’s was strange, then the events of the 20th-24th of October 2009 topped even that. Passers by must have rubbed their eyes in disbelief – was that really Doctor Who’s tardis in the graveyard?!! Yes it was, as the BBC were filming an episode of the hugely popular TV science fiction show (Series 5- “The hungry earth“) when Llanwynno briefly became the fictional village of “Cwmtaf“. Oh, and whose grave did the Timelord park right next to – yes it was the final resting place of Evan I Moses – you could not make it up!