The descendants of Evan IV are still today heavily concentrated in the first state they settled in – Pennsylvania. His possible/probable illegitimate son was presumably not asked if he fancied emigrating – see chapter on Edwin Davies / Moses. His third born child with Lydia, Moses II, did not live long enough to emigrate, so we shall now concentrate on the three Welsh born children who did emigrate and would live out their lives across the Atlantic.

Oldest child and namesake Evan (VII) W. married the South Wales born and “Not naturalised” 19 year old Jane Thomas. Evan W. was 26 years old and living in Nanticoke (Red Indian rather than Welsh!) in Luzerne Co.; his occupation was given as “Stable Boss“. Jane was still living at home with her parents David R. and Jane Thomas. They wed in Spring Brook Lackawanna Co. PA in July 1887, and for some reason it took them 11 years to start a family when Elsworth arrived in July 1898. In the census of 1900 the family were living in Hanover, Luzerne Co. PA and Evan was described as a “Day labour-er“. Remarkably considering his later occupation (coalminer), Evan lived to the age of 92, and so is the joint holder of the male Moses longevity record. 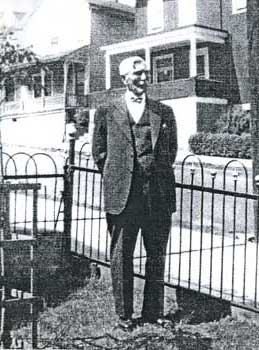 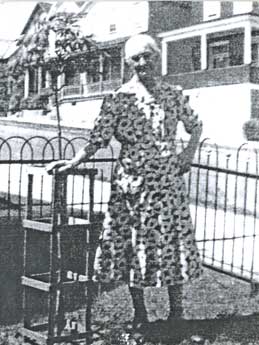 Eldest boy Charles worked on the railways and married Bessie P. in 1914; they had a daughter Janet J. born circa 1920. Charles’ brother’s George E. and Walter B. became coalminer’s, whilst youngest boy Lewis interestingly became a spinner in a silk mill. In the 1920 census Walter B. Rhoades was living in Hazleton with his wife Katherine S.

Back to Anne Rhoades (nee Moses), and she died in Hazleton Luzerne Co. on February 2nd 1929 aged “67 years – 11 months – 24 days“. Anne’s branch spreads out in Luzerne County, and today her descendants carry surnames including Krapf and Drasher as well as obviously Rhoades.

The last of the Welsh born children, Walter, appropriately went on to marry a Jones – Tabitha (b. Upper Lehigh 1871). They got married in Freeland in 1893 and went on to have three children – Orion (pronounced Or-E-on) Walter (b.24/8/1893 in Upper Lehigh PA), another Evan (XVII) J. (b.1901 in Mahonoy City) and Grace (b.12/3/1908 in Wilkes-Barre Luzerne Co.). Tabitha passed away in August 1943, whilst Walter enjoyed 13 years of retirement despite spending 56 years down the mines of the Glen Alden Coal Co.; he died in Wilkes-Barre in 1953 aged 85. One of the oldest members of the Bethel Baptist Church, Walter was photographed in the local paper on the occasions of his 78th birthday, 50th wedding anniversary and his 81st birthday when he was pictured with three generations of his own branch of the family.

Eldest boy Orion Walter became a coalminer and married Hannah Miles in 1919. In 1920 they were living in Wilkes-Barre, and ten years later they were based in Nanticoke Township, also in Luzerne Co. PA. They had three children – Walter Orion (b.21/10/1919), Russell E. (29/7/1921) and Edna (b.1924/25). Orion Walter Moses passed away on the 23rd October 1962 aged 69 in Hanover Township Luzerne Co., from coal dust or “Black lung” and T.B. His youngest boy Russell E. married Mary, and a daughter Sherry Lou arrived at the end of world War II. His oldest boy Walter Orion married Catherine M. Henning (step-father’s name was Lingertot) (4/7/1923-17/1/2006) and they had four children – Robert E., Cathrine/Cathy, Loretta/ Lolly and Pamela Tallulah. Walter Orion passed away on the 12th of February 2003. His youngest daughter Tallulah actually visited “Mae hen wlad fy nhadau” in 2007 along with her husband Cliff Miller, in what was probably the first trans-Atlantic contact in the U.K for about 70 years! Tallulah brought over with her some earth from the grave of her Gt. Grandfather Walter Moses who had left South Wales as a one year old baby 137 years before, and placed it on the graves of Walter’s grandparents and great grandparents at Llanwynno – a nice touch. As well as looking inside Saint Gwynno’s Church, where her Gt.x2,3 and 4 grandparents were married, Tallulah was also shown the ruins of Hendre Rhys Farm; quite a contrast from Palm Beach Florida where she now lives! 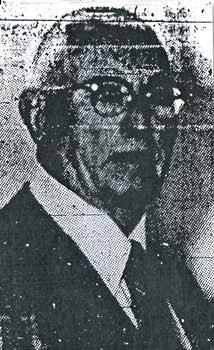 Evan XVII J. Moses became a colliery foreman at the same pit as his father; he died aged 83 in Mercy Hospital Wilkes-Barre in April 1985. He had married schoolteacher Anne Flynn, who died in October 1980. They had four daughters, Ann Theresa, Mary Collette, Barbara and Catherine, who became Mrs. Sweeney, Smith, Youngblood and Zwiebel respectively when they got married.

Daughter Grace worked as a tobacco packer before marrying Gerald Hummer (July 1914- July 1978). They set up home in Wilkes-Barre raising children Edward and Carol Ann. Grace passed away in a nursing home in Exeter, Luzerne Co. PA on the 11th of September 1994, at a good age – 86, but after 16 years of widowhood.

Evan and Lydia’s first American born child was William, who went on to marry Pennsylvania born Anna (b.1875) in 1892; they lived in Mahanoy, Schuylkill Co. PA. William Moses became a mine foreman. The couple had three children – two girls Muriel (1894) and Laura (1897), and then a son Harry (7/10/1900 – d. Nov.1969). In the census of 1920 all three children were still living at home – Muriel was a 26 year old single grocery assistant, 23 year old Laura had no occupation, whilst their brother Harry was a 20 year old mine clerk. Their father William died in 1953 at the age of 82, just a few days before his brother Walter. The two brothers were so close, people often referred to them as “twins”; when William fell gravely ill, the family were afraid to tell his elderly brother who himself fell sick and died just a few days after his beloved brothers passing. 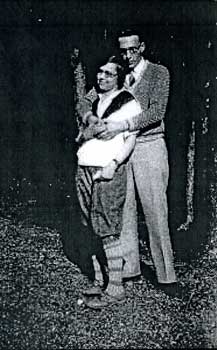 Youngest son Thomas Howard married Minnie May Sandt in 1897. Minnie May was born in the wild west sounding town of Raven Run in 1878; she died in the not quite so wild sounding Reading Hospital on December 5th 1956, aged 78. The couple had three children – Raymond Even (born the same year as the wedding on October 24th), Florence M. (b.1899) and the family was completed on August 18th 1903, when Thomas Howard II arrived in Easton PA. Thomas Howard I was a painting contractor by trade, and like his Welsh forefathers was a Baptist, becoming a member of the First Baptist Church. He died on the 4th of January 1952, aged 76, in Reading Berks. Co., and was buried three days later at the Chas or Charles Evans Cemetery. Interestingly, according to his obituary in the “Reading Times”, he outlived his eldest two children and his surviving son Howard (Thomas Howard II) would drown the following summer together with his own son in an awful double tragedy. Incredibly this means that in the space of just six months, three generations of this branch of the family had died! The double tragedy had occurred when painter and decorator Thomas Howard II’s eleven year old son Robert Howard drowned as he was being taught to swim by his father at Muhlenburg Township Berks. Co. PA Thomas Howard also drowned, on July 22nd, “Apparently trieing (sic) to rescue his son from the river“. I do not envy the person who had to break the news to wife and mother Effie Moses (nee Zeisloft). Poor Robert Howard (b.26/2/1941 was the youngest of four children; his older siblings were- Myrle Carolyn (b.1930), Donald Ray (b.1932) and Shirley Rae (b.1934). Widow Effie (born Boxing Day 1907 -married Thomas H. Moses in 1929) remarried divorcee William Franklin Kochel Jnr. four years later, and lived to the ripe old age of 89; dying in Myerstown PA on June 30th 1996. 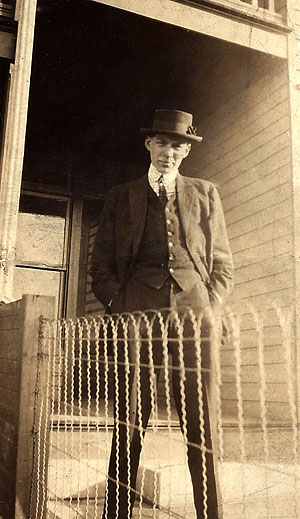 A world away from Ynysybwl – Farmer Evan Moses Gt. Grandson Raymond Even Moses pictured in Berkshire PA around the time he married Floy Madolyn Coller (1918). He would have been in his early twenties in his photo; but he looks older – might be the suit and hat!Below, their two children pictured circa 1930 – June Virginia and Forrest Raymond, at roughly eleven and nine years of age. 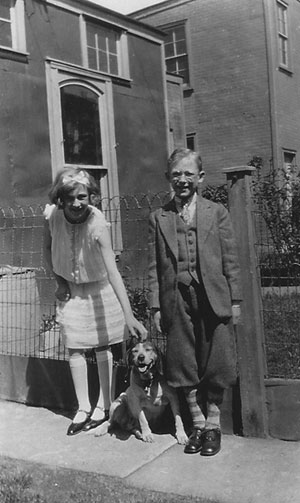 Surprisingly Effie does not hold the female Moses longevity record; this honour goes to her sister-in-law Floy Madolyn Moses (nee Coller) b. 6/7/1900, who died on January 19th 2000 at Berks Heim PA aged 99! She was the widow of Raymond Even Moses (d. May 1927); they had married on October 31st 1918. Raymond E. was working as a “Jute machinist” at the time of the wedding, and the couple began married life living with the Coller family in Berkshire PA. Raymond E. was drafted into the U.S. army during WWI, but luckily for him it happened just two months before the armistice! Their two children were June Virginia (1919-1973) and Forrest Raymond (21/1/1921-13/2/1996). June V. married Harry Bickel in 1942, there were no children. Forrest Raymond married Kathryn Ellen Spengler (1921-94) and they had just the one child – John William (b.22/12/1951 in West Reading PA). We have recently made contact with John W. Moses in Fresno CAL., indeed his wife Ruth Yvonne Jenkins is also of Welsh descent.

Back to Floy Madolyn Moses and, despite being blessed with an exceptionally long life, it was however blighted by tragedies both early and late on. Her husband Raymond E. was just 29 when he died from influenza; he apparently had a leaky heart valve, which contributed to his death. At the time he was working as a machinist for the Carpenter Steel Works. Floy Madolyn never re-married and remained a widow for an astonishing 73 years, which sounds almost mathematically impossible. She did however have a constant male companion in childhood friend and life-long bachelor Carl Beck. This too ended in tragedy (in 1982), when 85 year old Carl was robbed as he was walking home one evening, and died from the head injuries he received. Not surprisingly Floy Madolyn grieved for the rest of her life.

Named after her “mam”, Liddia Moses became Mrs. Fetterman in 1896 when she married former next-door neighbour and “Rail Yard Master” Ulysses G. (b.1872 in PA) in Hazleton PA. Their daughter Beatrice was born there two years later and, on the 9th of February 1901 she was joined by a brother Ulysses Jnr. In the census’ of 1920 and 1930, the Fetterman family were living in Delano Township Schuylkill Co. PA. Liddia II and Ulysses G. Fetterman are buried together in the Vine Street Cemetery Hazelton PA. Ulysses Jnr. died in New Jersey in November 1971.

The eighth and final child of Evan and Lydia Moses was Marie or Mary Jane. Lydia would have been about 44 years old when she gave birth, and two decades had passed since she had her first child (Evan) all those years ago back in Pontypridd South Wales. Marie went on to marry New York railroad clerk Frank H. Swettman (1872-1919), who was nearly a decade older than her, in the autumn of 1900. They set up home in Manhattan Ward 22 in New York City. The couple had no children, and as you may have noticed, sadly Marie lost both her husband and mother in the same year (1919). In the following years census she was listed as a 38 year old widow lodging in the Manhattan Assembly District with “No Occupation“. Things had not improved by 1930 – she was still on her own, still had no occupation, and had now forgotten where she was born. But she had moved to the unusually named Peabody in Essex County Massachusetts. Reading between the lines, it seems that Marie/ Mary Jane never got over that double bereavement she suffered in 1919. We lose track of her after 1930; hopefully things did pick up for her in the second half of her life.

The surname Moses has obviously been diluted over the years, and the descendants of Evan IV and Lydia now carry a wide variety of surnames including – Argot, Christman, Drasher, Giacobbe, Houck, Kaiser, Keller, Krapf, Miller, Newlin, Rhoades, Sappenfield, Schantz and Wanner; about as far removed from traditional Welsh names as you could possibly get – not that Moses was that traditional! Interestingly, one of Evan IV’s Gt. Gt. Grand-daughters, Sharon Houck, has been researching her Welsh roots from the other side of the Atlantic. Her research entitled the “Descendants of Evan Moses“, starts from the grave at Llanwynno and concludes with a John Brady Houck, born on June 4th 2001 in Pennsylvania.